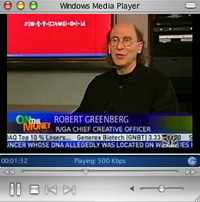 Robert Greenberg from R/GA continues his crusade to promote interactive brand engagements as the successor to traditional advertising.  And, he takes on the powers that be on their  own turf—Television (view the video).

In his soft-spoken way, Greenberg points out that the audience is shifting to where they have more control and that traditional marketing simply costs too much—and is difficult to measure.  Ad execs, should take this seriously as much of Greenberg's former predictions have come to pass.  R/GA embraced CGI post production in the early eighties—a bold an innovative move back then.  When the Internet first arrived on the scene, he converted the agency to the interactive medium in short order.  And their secret weapon?  Creativity.  Lots of it.