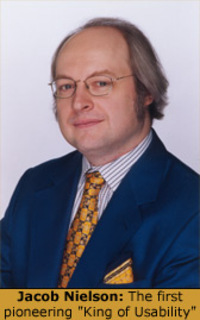 Webmonkey recently included an excerpt from Jakob Nielsen's new book "Prioritizing Web Usability".  The exerpt includes "Eight Problems That Haven't Changed".  I thought it would be interesting to review these and see what I agree/disagree with.

1. Links that don't change color when visited
Is this really a usability problem?  I tend to recommend against this when designing sites for a few reasons.  Complex sites often have multiple link states.  Some are graphics.  Some text.  Some underlined.  Some not.   It’s best to make your “link language” as simple as possible.  Adding a visited state treatment adds another layer and can make a page seem even more confusing when you see lots of “unclicked links vs. clicked ones”.  But my biggest reason for not doing this is that most people make poor choices with how they choose their colors here. The results are often “color challenged” and can take away from a clean, simple elegant design.

My opinion is that changing link colors is more important for content sites.  If you have a corporate or brand site—it can take away from your presentation, which is something to consider.

2. Breaking the back button
Totally in agreement with this one.

3. Opening new browser windows
Why is this still a bad thing?  I remember in the early days we didn’t want to clutter and complicate.  But people these days seem more comfortable managing their own windows and often times have multiple windows open.  And look at how the younger generation uses technology.  Rarely are they doing one thing at once.  I’m just not sure that this one still applies—though it’s wise to limit how many windows you serve up in your site experience.  I’ve seen many sites abuse this.

4. Pop-up windows
Mostly agree—but only if they pop-ups are not under control of the user.  If the user clicks on a link and has an idea that content will be served in a pop-up—it’s not a bad thing.  At least that’s what I’ve learned from my experience from user testing.  Just make sure you give the user the right tools when they have that pop-up open.  Sometimes pop-ups give an experience an advantage because they can frame content in a way that gets you to focus on it by stripping out some of the “noise”.

5. Design elements that look like advertisements
I’m in agreement here.  There needs to be clear distinction between ads and content.

6. Violating Web-wide conventions
Mixed feelings here. As a general rule of thumb—I agree that conventions are useful and should be followed.  Think of when you are lost in an unfamiliar city and the signage is poor.  It’s very frustrating.  BUT sometimes we have good reasons to break convention or even create new ones.  Point in case: “moving panels” are emerging as a popular W2.0 convention that conceals and reveals content.  It’s fairly intuitive but also fairly new.  My philosophy is that as long something is intuitive—it’s worth trying even if it’s not an established convention.  Human beings tend to adopt quickly as long as they can figure something out in a short amount of time.

7. Vaporous content and empty hype
Mostly in agreement here—and this extends past Websites.

8. Dense content and unscannable text
Mostly in agreement here as well. And good timing on this one.  I recently wrote a post on Marketing Profs and stated that many blogs out there suffer from basic usability issues.  One of the biggest offenders is “Dense content and unscannable text”.  An example of this is Doc Searl's blog which uses an expanding template and lots and lots of text, text and more text.  This combination makes it a little tough to read after a while.  It doesn’t provide enough breaks.  So bloggers should really take a close look at this one.

That’s all for my 2 cents.  Jakob tends to have a reasonable collection of tips and I often agree with many of them—he's been at this for a while and knows what he's talking about.  And I’ll add that usability is woefully underrated—often times it's treated like an afterthought (especially in marketing).  But I also believe that different experiences are designed for different kinds of people and this needs to be taken into consideration as well.