Power Consumer is The New PC 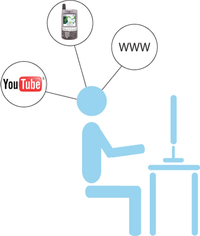 It’s officially official.  We’re not gonna take it...anymore.  In the early years of the internet, we saw consumers educate themselves online—get product information, make comparisons etc.  They armed themselves with reviews and data before heading to that car dealership.  Today, it’s a whole ‘nother ballgame.  Now armed with technology such as mobile video enabled phones, digital recorders, blogs, and other tools,—the consumer has gone from being empowered to just plain powered.

If you haven’t already heard this recording from a 30-year -old who rips AOL to shreds, you really need to check this out.  All he did was record his conversation and blog about it.  The mainstream media picked up on the action once the story began gaining serious momentum on the internet and blogoshpere.

What’s happening here is simply amazing.  Not only do people have immediate access to information that cuts through the corporate smoke and mirrors —but the Power Consumer now has a voice which can be heard by millions.  And it cannot be stopped.  AOL’s response was lame.  They are positioning this as an “isolated incident” that has been dealt with.  Is that enough to undo the damage?

The curtain has been pulled back and some ugly truths are being revealed.  The customer experience matters, and this new breed of customer now has an array of methods to get their point across.  The business world may want to re-evaluate what kinds of PR agencies they deal with, because they are going to have to get used to putting up with the technology enabled Power Consumer.