Interview With A Barbarian

You may or may not have heard of The Barbarian Group, but chances are you've seen some of the work they've done for brands such as Saturn, VW, Comcast and Burger King.  Subservient Chicken ring a bell?  They played a role in that.  The Barbarian Group is an interesting agency model—they push interactive technologies and creativity to the limit and often work behind the scenes partnering with larger agencies as well as working directly with clients.

I recently had a chance to catch up with Rick Webb, co-founder and Lead Barbarian for a little Q+A.  Here's how it went:

DA: The first time I heard "Barbarian Group" I thought it was a unique name (I like it much better than Vector). I also like that you refer to each other as "Barbarians".  What's the meaning behind the name and why did it win out over your other choices?

RW: Oh God. It was one of those endless meetings where you keep trying to think up names and you are completely exhausted, and don't want to pay attention anymore. The four of us - Me, Ben, Keith and Robert - were sitting in Ben's house and Keith and I were having trouble keeping our curiosity up. We got distracted and started talking about Civilization 3, which was coming out that week, and I cheekily mentioned the Barbarian Hordes in the game.

Ben latched onto it and said "that's it!" He liked it because it wasn't too agency sounding, like all our other names were, and it could be imprinted upon anything. He also thought it sounded good because it "struck fear into the hearts of our enemies. " I do think it forces us to maintain a rock and roll attitude, and not take things too seriously.

I also like the linguistic quirks of things like calling ourselves "Barbarians." We have our own copy style guide, and making sure the tone is professional but fun is vitally important to us.

It's ridiculous how poor corporate communication in America has gotten.

DA: Looking at some of the work produced for Discover, Comcast and Method—there is a high degree of interactively combined with a "big idea".  What does a typical Barbarian team look like and how would you describe how team members work with each other + clients?

RW: The standard team on a medium to large project has changed through the years. Early on it was one tech, one project manager, and one creative, who also did the Flash. Since two of the three people on that team were usually partners in the company, lots of oversight, account service, etc., wasn't needed. Over the years, we've expanded our offerings and capabilities to include more straight up design, copy writing, and other services, so a typical team could be much larger now.  The base is still a producer, a tech lead and a creative lead, but there may also be a copywriter, a Flash person or designer who isn't the creative lead. We may also have more than one programmer, if needed, a separate producer for a video shoot, if there is one, and there's always a partner on the team to make sure things are kosher, though we're usually performing one of the above roles.

We've experimented heavily through the years trying to find the right size of a team, and trying to find out how to keep the creative as pure as possible. We're on maybe our fourth model now, but we're all liking this one a whole lot. We're pretty strict and picky about who we hire, and everyone's ridiculously talented, so we have the luxury of experimenting some without worrying too much things will get messed up.

Working with the agencies varies so much it's kind of ridiculous. We have about 20 agencies we regularly work with, and every one of them has a different work style, and every job has a different level of engagement. The one consistent trick is that the producer and I always try and find the best way to work with the agency, and our producer is actively engaged in managing the project. I dream of making it more process-driven, and we do apply rigorous project management techniques, but recently we've come to terms with the fact that agencies are all very different, and we'll always be striving to work with them more efficiently. That's not to say many agencies don't bend over backwards to try and work with us in what we perceive to be the most efficient manner, of course. Only that, well, it's hard.

In the big picture, when it works, it works brilliantly. Strategic and creative minds meld into one, and it all falls into place who should do what. We're lucky, and that happens more often than not. Agencies are actively trying to bring us in earlier and earlier, which is helping immeasurably. 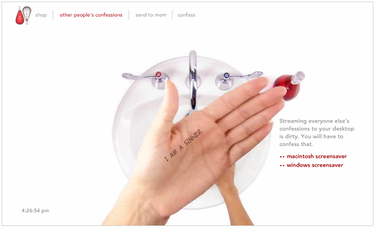 DA: What does the Barbarian Group do better than anyone else?

RW: Tell the truth. It's our secret weapon. It's amazing how often people won't say what they're thinking, or call things like they are.

DA: The internet has really gained traction in the past two years partly because of advances in technology and broadband—but also because of the shift in media consumption with an increased appetite for interactive.  How has this shift affected The Barbarian Group?

RW: Okay, so I'm telling everyone this these days. If you're an innovator on the web, advertising is the new venture capital. Eight years ago, if you had a good idea for an internet site, you got your money from a VC - the "amazon" model. Five years ago, if you had an awesome idea, you went ahead and built it with a bunch of your similarly unemployed friends - the "Flickr" model. Now, if you have an awesome idea, you should get the money from advertisers. We view ourselves as innovators at heart. We love advertising and we understand brands, but deep down we're internet nerds. And this increased appetite for interactive, and the commensurate newfound attention from advertisers, has subconsciously shaped us, I think. We do this because it's where the freedom is. It's where the action is.

And advertisers don't force board members on you when they give you money.

DA: What are some of your favorite "Non Barbarian" examples of great interactive work? Why?

RW: I love the Time Magazine Person of the Year site that ran in Times Square last winter, by RGA. I love the Ikea stuff that Foresman did in Sweden. I love everything North Kingdom does.  I love the Goo stuff that Ground and Dentsu do in Japan. I love Yugo Nakamura, Erik Natzke. I am confining myself to interactive advertising here, which is an important distinction. I'm not talking interactivity in general.  I love these from a design geek point of view. I love these because they are beautiful, fluid, surprising, different, ground breaking. They may not always be the most effective advertising, but they're the ones that I am envious of deep down.

DA: Much of the work you produce is Flash heavy and experiential.  How do you approach things like basic usability and user experience?

RW: We are totally lax and intuitive about it. We do advertising. We don't do banking sites. We all know it, of course, from "back in the day," and we care about it. But when you're making a Subservient Chicken or a beer site, it's not necessarily foremost in your mind, nor should it be. More and more, though, as flash minisites fall by the wayside and we expand our horizons, the old ways have been making a comeback. We're using CVS again. We're making wireframes again. We've finally made a QA policy at the Barbarian Group. We still haven't put anything through a usability lab, though. 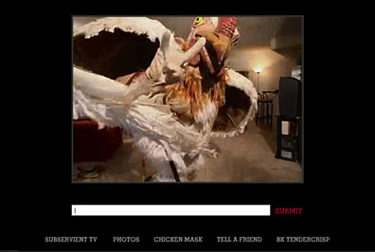 DA: What about project management?  How does that fit in?

RW: Project management is a ridiculous obsession of ours. We actively, ruthlessly seek the best interactive project managers we can find. They run every project. Because our clients are so consistently different, the project managers are our saviors. We don't have account service. Our PMs fulfill that role as well.

DA: What are your greatest sources of inspiration? What motivates you to get up in the morning and do it all over again?

RW: I could talk about heroes (ahem Tony Wilson and Peter Saville), but I think the thing that keeps me going is how far we come. Five years ago, we had some theories about how things worked in this little niche of where the internet meets advertising. They were totally validated. It makes you wonder about your other theories. It makes you wonder what else you could do. In the words of Gore Verbinski, in this week's Entertainment Weekly, if you're going to fail, fail big. I figure we'll keep plowing ahead until our theories turn out to be misguided. And having the opportunity to find this out about these ideas is what keeps me going.

It's a weird experience, being able to investigate your wildest, most grandiose theories.

DA: There is talk of interactive agencies becoming "traditional"-doing "safe" things like online advertising, sitelets and going after the industry awards for validation.  What's your take on this?  And how do you feel about emerging media such as Social Networks?

RW: This was a HUGE, soul-searching issue for us this year. It would be so easy to turn into the next RGA. It's too soon to say much more than I have already about exactly why, but I am confident in the next 12 months it'll be radically apparent that we have no such intentions. It's a serious concern, though, and God knows it's very tempting. The holding companies circle. Money is dangled. You get good at something, and it's easy to fall into a rut. We're struggling mightily to avoid, or get out, of that rut. I think the hard part is behind us. We're radicalized now.

We want to change the world.

DA: In one word-describe the "essence" of The Barbarian Group