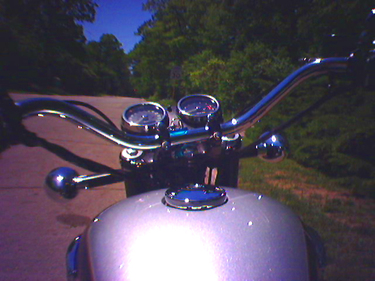 I have a confession.  I’ve been losing perspective.  It happens to all of us.  And I know I’ll get it back—I always do.  I realized it today, where I usually figure out things like this—on the motorbike.  I’ve got some stuff going on, and needed to clear my head.  Before I get into my moment of clarity, let me take a moment to briefly describe one of my passions outside creativity and blogging.  Riding a motorcycle taps into a deep spiritual need that I think we all have.  When you’re on the road—up shifting, down shifting, breaking, leaning and of course squeezing the throttle, you're using every sense that you have and there’s no room to think of much anything else.  It’s you, the road, the sound of the throaty engine and some cars around you which can take you out at any moment.

Today, I was traveling one of my normal routes when I noticed a deer drinking from a puddle along the side of the road.  I didn’t get a picture of the deer—but it did pull over to watch it.  I was probably less than 20 feet away.  I watched that deer for about 5 minutes.  It would gently sip the water.  Lift it’s head.  Look around for a bit—then get back to drinking.  After watching the deer trot away, I fired up the bike again and took off.  Then I had this thought:

I’m not pulling over in life as much as I need to be.

I could have passed by that doe and enjoyed it briefly from afar.  I could have simply continued with the ride.  But something told me to stop and pull over.  And I was glad I did.  Something about watching the animal filled me with peace.  So now that I’ve had a little time to reflect, I’m fairly certain that this was a message.  I need to pull over.  I need to notice the everyday beauty in my own life.  I need to slow that engine down—to downshift with one foot and break with the other.  To gingerly lean and pull over to the side.  I need to take in a few things before starting up again.  I hope I can do it because I know it’s needed.  When you’re riding—you don’t always notice the signs that pass you by.  When you pull over, you see things from a different perspective.