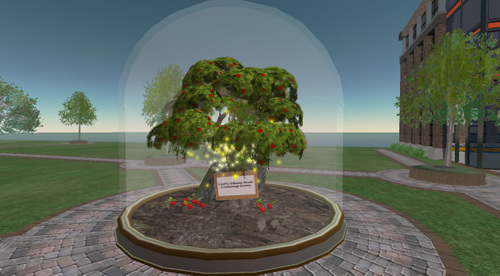 Leo Burnett/Arc Worldwide have beat the agency world to the punch by being the first to major agency to set up shop in Second Life (the picture above is their virtual hub).  And good for them!  It doesn't matter if there is even a practical use for an Ad agency in second life, Leo with it's rich heritage in pushing 30 second spots has done something the other agencies, including the digital ones have not.

From the fruits of imagination:

"London, September 28, 2006: Today Leo Burnett Worldwide and its marketing-services partner, Arc Worldwide, announced they are in the final development stages of an “ideas hub” in Second Life, one of the Internet’s most populous virtual worlds. Soft launching this week and expected to be fully up and running in November 2006, the hub will be a virtual learning campus, created to further connect and grow the creative talent of the group’s global network. For a flat rendering of the hub, please visit http://tinyurl.com/nkjvz.

Conceived as a celebration of creativity, the yet to be named hub will immediately bring together in a virtual world nearly 2,400 creatives from Leo Burnett and Arc Worldwide in 80+ countries.

Leo Burnett Worldwide Chief Creative Officer Mark Tutssel said, “Collective imagination will always be greater than individual creativity – and as today’s new technology now gives us untold possibilities for tapping into the creative brainpower around our network and beyond, the launch of our SL presence is all about our seizing with both hands the opportunity to learn, collaborate and create fresh ideas across the globe.”

Is this a PR stunt?  Is it experimentation?  Is it really a genuine desire to collaborate creatively taking advantage of the virtual medium?  It could be all of the above.  But most importantly, it will give Leo an understanding of Second Life first hand, so if they recommend this type of marketing to clients, they might actually know what they are talking about—because they are doing it.

Here's how the post on fruits of the imagination ended:

"I think it's a good idea, if only to get people around the company participating in social networking and seeing what it's all about - you can only learn so much by reading about it.  And a day after we announced it, BBH also announced (subscription required) they're setting something up.  We'll see if either one of these virtual places actually becomes used or useful, but I'm just glad to see some agencies trying new things.  Let the games begin..."