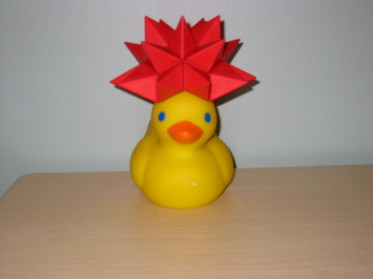 Roger von Oech, author and creator of the Innovative/Creative “Whack Packs” wants to give you a whack up side your head.  Well at least figuratively speaking.  Roger recently phoned me and we had a pleasant conversation about creativity, innovation and blogging.  The conversation has lead to two very cool things: 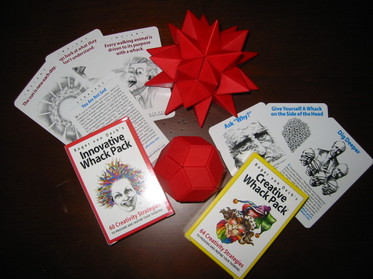 Let’s start with the Ball of Whacks (that’s the punky hairdo on top of the rubber duckie’s head).  I played around with it for a bit—as did my boys.  It’s pretty cool.  For one thing, the 3-D triangular shapes force you out of linear thinking.  You really can’t stack them as you would with building blocks.  So in a way, you have to build things in a fluid , organic fashion.  It's pretty relaxing too.  The magnetic shapes make a soothing “click” sound when they snap into place.  But because they are magnets—there isn’t anything to connect like Legos.  I think the product is ideal for either ideation sessions with a larger group (some people like to use their hands while they think).  It also seems well-designed to sit by your desk as a diversion from the computer.

Thanks for sending me the freebies Roger!

Now, let’s talk about Roger’s new blog—which is less than a week old.  You should keep an eye on this as it’s rare to witness a blog develop in it’s early stages. Roger set up his blog shortly after our conversation.  And the cool thing is that he’s already got tons of content and images at his disposal from his writings like this one:

Don't Fall in Love With Ideas
"If you fall in love with an idea, you won't see the merits of alternative approaches -- and will probably miss an opportunity or two. One of life's great pleasures is letting go of a previously cherished idea. Then you're free to look for new ones. What part of your idea are you in love with? What would happen if you kissed it goodbye?"

I was familiar with Roger’s Creative Whack Pack even before hearing from him in person.  I’ve used it in meetings with clients such as HP. And I’ve also used it as a complimentary deck to the IDEO method cards.  Both offer a nice take at creative/design thinking.  So I’m personally encouraged to see that Roger has started blogging and I’m curious as hell to see where the adventure leads him.  More proof that it’s never too late to start a blog.

Anyway, if you have time—check Roger out at CreativeThink, and don’t be afraid of Whacking yourself in the head every now and then.