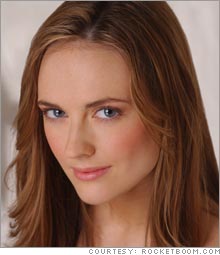 Amanda Congdon ends weeks of "speculation" today by officially making it official that she's officially working  for both ABC+HBO (is this official enough for you)?.  BusinessWeek has a nice Q+A with the new prime-time star:

"Congdon, 25, will regularly appear on ABC's online news channel, ABC News Now, and will host a weekly five-minute video blog appearing on ABC.com. Congdon, who will primarily provide news analysis and commentary through the network's online channels, says she also expects to occasionally pop up on Good Morning America, Nightline, and other ABC news television programs.

Congdon also found an outlet for the comedy chops she developed on Rocketboom. She's working to develop a show for HBO's on-air and on-demand channels. The subject of the show is still in the works, but Congdon plans to both write and star in the series."

In response to the final question about this new age of celebrity, Amanda says:

"A celebrity used to be someone you could never get near and never touch…. Now, if you look at MySpace—Nicole Richie has a MySpace page. Celebrities are seeing, or their managers are telling them about, the benefits of getting involved online and [interacting with the audience]. Radio personalities are having Web chat sessions with fans, and the viewers are becoming a part of the shows, which is so terrific because it isn't television putting out information that viewers passively receive. There's a give and take now."

Now the big question is how Amanda's talents will translate over into the mainstream.  Will it be watered down?  Will it still feel "real"?  Or will Amanda, just be... Amanda.  Time will tell.