My second job out of Design School was as a Broadcast Designer for the Fox News Channel located in the heart of Midtown Manhattan.  This was just over 10 years ago before the channel even launched.  I was actually part of the design team that launched the brand new station.  It was a pretty amazing experience, though I think it also prompted my move to Chicago as I was fairly burnt out after that action packed year.  24 hour Cable news is an intense environment—and looking at the election coverage, the intensity seems reflected in the broadcast design.  Here's a high-level breakdown of some general observations: 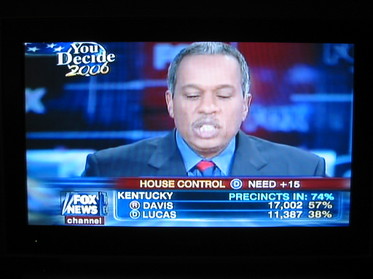 Fox had lots of blinking, spinning and fading in and out going on in the lower third of the screen—over by the percentages.  It took a while to get used to, and the slowly rotating logo didn't help.  On a positve, the type was fairly large and easy to read. 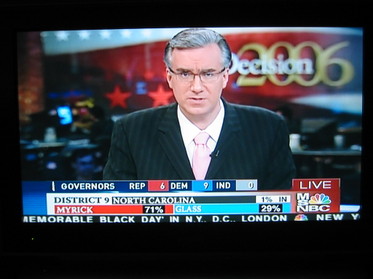 MSNBC was slightly cleaner using solid bars of color to call out the stats... 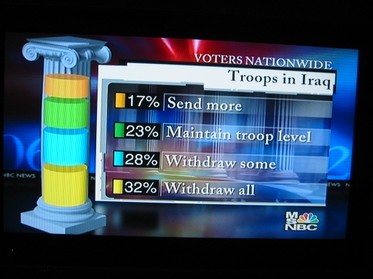 ...but then they overdid it with the 3D graphics, motion blurs, lens flares and swooshing sounds.  And why the Greco-Roman column?  Is it representing the Senate?  Maybe—but not sure if it's needed.

Out of the three, I thought CNN had some interesting techniques.  They used a "balance of power" scale which showed which political candidate was closer to winning, and there was also a visual that looked like a mobile phone reception meter which indicated the amount of precincts in.  When the bars were full, all precincts were in.

Specifically sticking to broadcast design, I didn't think that one network really blew the others away—actually I think there is room for improvement in general when it comes to presenting information in a broadcast format.  Personally, after spending a good portion of my day on the computer screen, I'm ready to give my eyes a rest.

One last observation—again speaking strictly from the broadcast design perspective, after flipping through the channels I started blurring the network identities together.  Each began feeling a little similar to the other.  It could be partially due to the patriotic color schemes which each one was tapping—but I wonder if any of the three are differentiated enough visually.  There's some real opportunity for one of these to break the broadcast mold.