Getting Whacky with Roger Von Oech Four years ago, I was unpacking some boxes and came across a deck of cards called the "Creative Whack Pack".  I didn't remember how I got the deck, but I opened it up and easily killed an hour going through them.  Since that time I've used the cards in numerous brainstorming exercises with clients such as HP.  Fast forward to a couple of months ago and my mobile phone rings.  Hello?  "Hello David, this is Roger von Oech—I saw your site in BusinessWeek".  The rest is history.  Roger has added blogging to his resume and is extending his influence to a whole new audience.  He recently indulged me with a little Q+A.  Don't be deterred by the lengthy post.  It's worth every word—so enjoy.

DA: What is the correct pronunciation of your last name anyway?

RvO: I pronounce it "von Eck" (rhymes with Neck)

DA: You’ve been a creative evangelist for some time now—how are things different now from when you first started.  How are they the same?

RvO: When I started my company, Creative Think, in 1977, it was very difficult to sell creativity to corporate America. Companies back then thought they had all the answers and they were a lot more rigid. The only other people I was aware of who were promoting creative thinking at that time were Edward de Bono and (Stanford professors) Jim Adams and Bob McKim.

After I left IBM, I put together a creativity seminar. I then did two important things that helped me be successful:

1) I didn't sell "creativity" as my product; instead I sold the "product of the product," that is, what creativity would do for a company, e.g., "higher productivity," or "better communication between marketing and engineering," or "projects completed in less time."

2) I sold really hard -- I was a man with a mission. IBM was my first client, then Hewlett-Packard, and the Federal Reserve Bank. By 1979, I was doing creativity seminars nationwide with the likes of DuPont, Sears, Chevron, Hughes Aircraft, and ARCO. I even worked with Apple before they were a public company (1980).

My two big breaks were: 1) the recession of 1980-82. Companies discovered that what worked in the 70s wasn't going to work in the 80s, and so they realized they needed to be creative. That's when they would call me to help them.  2) My other big break was when my first book, "A Whack on the Side of the Head: How You Can Be More Creative" was published by Warner Books (since then it has sold nearly 2 million copies and been translated into 17 languages).

By 1985, I was featured in BusinessWeek, and ABC's 20/20 did a 7 minute feature on me. I'd say by the mid-80s the field of creativity consulting gained a great amount of legitimacy. By the early 1990s, it seemed like there were 200 "creative consultants" out there doing their stuff. It was a pretty heady time. I did a lot of seminars, workshops, and speaking gigs in the 80s and 90s.

After the "Bubble Economy" of 1998-2000, 9/11, and the recession of 2001-2002, most companies turned inward.  But in the last 18 months, INNOVATION has gotten to be quite the big deal again  in corporate America and beyond. There must be 2,000 or more "creative consultants" out there doing their thing these days. I think this is great!

DA: What are the main barriers that you see standing between companies and innovation/creativity?  What do they need to overcome?

RvO: Three things:
1) Past success in a particular area can make it more difficult for them to try new approaches that might jeopardize that revenue stream;
2) hierarchical organization prevents cross-fertilization of ideas
3) not listening closely enough to one's customers.

I recommend to my clients that they put an "innovation quota" in every employee's performance plan -- this is true for people in IT and accounting as well as marketing and R&D. This encourages people to look for ways to make innovative changes in their business structure. Those who don't do this will not be rewarded or promoted.

DA: What do you think we need to overcome at the individual level?

RvO: We need to break out of "the prison of familiarity." No matter who you are, the more often you do something in the same way -- again and again and again -- the more difficult it is to think about doing it in any other way.

Here are two simple strategies I recommend to break out of this prison:

1) LOOK FOR THE SECOND RIGHT ANSWER. When most of us have a problem, we stop with the first solution or right answer we find. If you want to be innovative, you need to force yourself to go beyond the first answer, and look for other right answers -- sometimes it's the fifth right answer to a problem that will turn into creative gold. 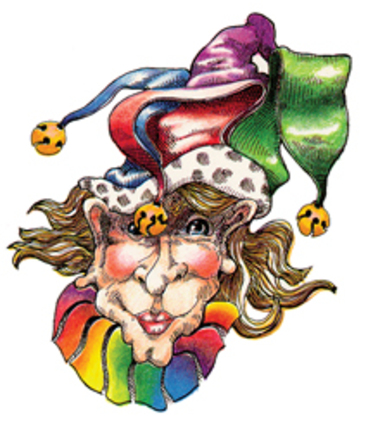 2) HAVE A SENSE OF HUMOR. I think there's a close relationship between the "haha" of humor and the "aha" of creative discovery. If you can laugh at a problem, you open up your thinking to other possibilities.

DA: What inspired you to put your thoughts about creativity and innovation in the format of a deck of cards as in the Creative Whack Pack?

RvO: I had always wanted to have a creativity workshop in a box. So, in 1986 I boiled my main creativity concepts (from my first two books: "Whack" and "Kick") down to 64 ideas -- which is just about right size for a deck of cards. I divided these into four suits -- after my model of the creative process: Explorer, Artist, Judge, and Warrior -- of 16 cards each. 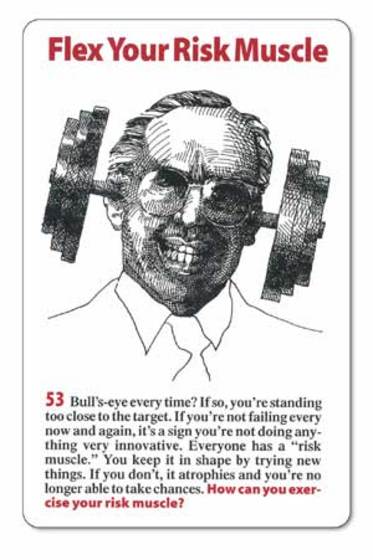 The key thing was the design of each card. Put a creativity strategy at the top, for example, "Don't Fall in Love with Ideas," or "Sell, Sell, Sell." Then have a drawing by my artist George Willett. Then have a story, parable, or example of this creative strategy. And finally, have a question or two to force the reader to apply the strategy to his life.

I did a deal with US Games in Connecticut, and the first edition came out in 1989 (there have been two subsequent editions). Both Fortune and CBS News did stories on it in 1990, and the product took off. People love using it. It's been a very popular product: about a million decks sold.

One thing I'm really proud of is this: prior to the publication of the Creative Whack Pack, there weren't decks with business content on them. The Whack Pack was the first. Now, there are many, many decks. I feel somewhat like a pioneer in that field.

DA: How about the Ball of Whacks—what inspired that?

RvO:  I wanted to move beyond written stuff -- books and card decks -- and create a product people could really get their hands around. I often get my ideas when I get out of the verbal part of my brain. Flipping a ball size object about does the trick. 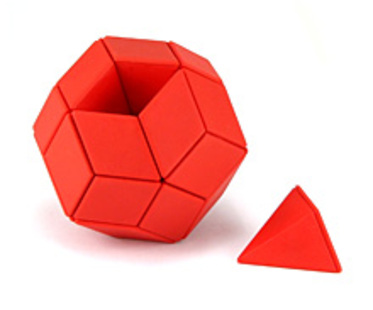 Several years ago, I stumbled on to the 30-sided polyhedron, the rhombic triacontahedron. It's one of geometry's most beautiful shapes. One day, I idly asked myself, "How can I improve the playability of this shape? Why not cut it into thirty rhombic pyramids? These were beautiful shapes, but how to hold them together? Why not put rare earth magnets in each side. Bingo! The Ball of Whacks. It's a great manipulative, and you can make many, many shapes with the pieces. 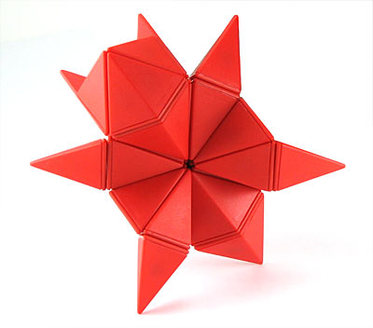 The last two years have been a very interesting experience in developing this product and bringing it to market. I have had to learn how to write a patent and deal with the USPTO, work with a mechanical engineer and CAD guy, learn about SLA, aluminum, and steel tooling, go to China to get a manufacturer, get sales, marketing and distribution in this country, and so on, and so on. It's been an incredible learning experience.

One of the positive, unintended consequences of bringing the Ball of Whacks to market has been my getting involved in the blogging world. I started a blog in September to promote the BOW. What I've discovered is an amazing and energetic place -- a big frothy soup.

As it turns out, the BOW was a stepping stone to my contributing to the blogosphere.

DA: You are both a husband and father—how has this influenced your own personal creativity?

RvO: I often get this question from parents, "What can I do to stimulate my child's creativity?" I guess my simple answer is: "Be creative yourself. You are their model. If you do creative things, they will too."

The key thing with my children was teaching them that there's a time to be creative and there's a time when it's inappropriate, and that it's important to learn the difference. (They seem to be turning out okay: my daughter graduated from Stanford several years ago and is working at Ning.com, a Marc Andreesen-backed internet startup in Palo Alto; my son is a Marshall Scholar in his senior year at USC.)

DA: You have taken to blogging like a duck to water—what are the aspects of blogging that came as a surprise to you?

RvO: It's been really nice to have "beginner's mind" again. So, I've had to learn a lot of the ins and outs of the craft. That makes it exciting. At this point, I'm trying "find my own voice." Also, I figure if you're going to do this (blog), it's good to have an audience. So, I've found that it's really important to get out and read other blogs and comment on them. And, I'm not shy about saying, "Nice post," or "interesting comment," or, "I didn't know that, you really made me think." By the way, there are a lot of very good blogs out there.

Two surprises:
1) hearing from so many people who've said, "I've read your books and they changed my life," or "I've used your Whack Pack," or "You came to my company fifteen years and stimulated management to think creatively." It's a really wonderful feeling.
2) The other surprise is all of the new people I'm meeting -- especially those in their 20s and 30s. What a great medium.

DA: Open mic—anything on your mind you would like the audience here to know about?

RvO: David, I really appreciate the guidance you've given me in the early stages of bloggerhood. Thanks a bunch. If your readers have a few moments, drop on over to my site and scroll down through my posts. If you like some of what you see, then just hit the "Subscribe" button in the upper right hand corner! (Is that too shameless?)  Good luck to all your readers, and happy whacking!