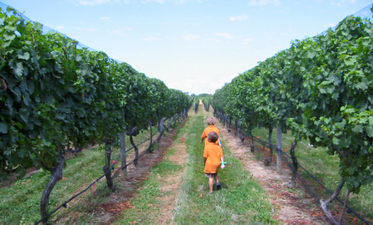 Here's a pic taken from a vineyard on the North Fork of Long Island.  That's big brother Max marching full steam ahead and little brother Mason following his path.  They were on an adventure together, exploring and making trails out of the vineyard rows.

Be that little sibling.

Take on the apprenticeship and learn from those who have seen more than us.  But what you don't see in this picture is what happened shortly after.  Both boys quickly turned around and marched back in my direction—full steam ahead.  And guess who's turn it was to follow in little brother's footsteps?