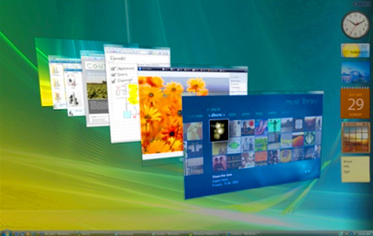 Quick, what do you think of when you hear the word Microsoft?

With the upcoming release of Microsoft’s new OS, called Vista (shown above)—Microsoft takes a page out of the Apple, Nike, Target, and even Motorola play book and gets serious about the role of design in the Microsoft brand experience.  Will the new OS, transform the way Microsoft is perceived similar to what Motorola experienced with the break through RAZR?  Only time will tell.

But, something seems to be in the water at Microsoft.  Last week I had lunch with Chris Bernard, a “User Experience Evangelist” with Microsoft.  An alumni of Chicago’s own Institute of Design at the Illinois Institute of Technology, Chris is working hard at weaving design principals and the role it plays in the entire customer experience into the fabric of Microsoft's culture.  It’s a huge company and he will no doubt have his work cut out for him as traditionally, this hasn’t been at the core of Microsoft's strengths.  To be fair, Microsoft did tap the power of design heavily with the release of the Xbox.  Not only was the game interface totally overhauled, but the unit itself was transformed from a “black box” to a thing of beauty (and power) with the shift to a sleek, organic, white unit which can be stood up or placed on it’s side.

So what is Microsoft hoping to achieve through holistic design principals?  Think about what the PC experience used to be years ago.  Maybe it looked something like this: 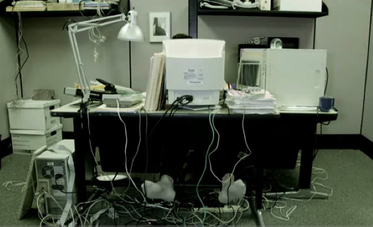 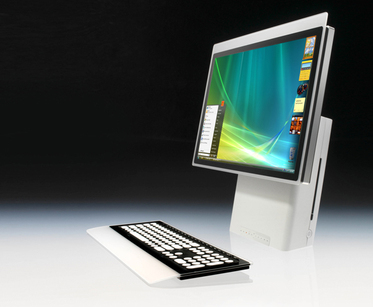 How does Microsoft intend to get here?  They are incorporating a design philosophy they call AERO.  It goes something like this:

“Ease of use is important but we want to also really improve Efficiency for people using Windows a lot, and make them more productive.  We want the product to deliver more than just doing what it is supposed to enable you to do: we want to evoke a positive emotional connection (when people feel better about what they are doing they in general are more productive, make less mistakes, take more pride in their accomplishments etc. which is all goodness, also for business)".

Will the AERO design philosophy work?  There are some bits of evidence.  As Chris and I chatted, he demonstrated some software design applications Microsoft is rolling out.   But as he demonstrated these, I was also paying close attention the the Vista OS that was running on his laptop.  Sure, it resembled Apple in some ways—but I couldn’t help but wonder how a PC user would react to the changes.  Here’s a couple of highlights: 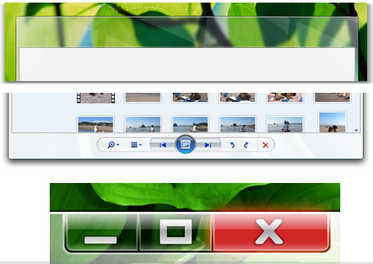 From what I could  tell in my brief encounter with Vista, it looked pretty sweet—definitely a big move for Microsoft, but I have to get my hands on it for the true test.   So, will design for the entire customer experience help move Microsoft forward?  We’ll have to see.  An improved operating system that is “useful, usable, desirable, and feasible” to use Microsoft’s own words is good start.  But it’s a start.  In my meeting with Chris, I shared with him that the core reason I opted not to purchase the Motorola Q after playing with it.  Though I loved the small, stylish smart phone itself—I had difficulty getting past some interface issues related to that particular version of Windows Mobile.

In the end, it just didn’t “feel” right.  I think Microsoft is on to something here with their newfound focus on the user experience across all touch points.   People make decisions on what “feels” right and design in the context of providing a good experience has a lot to do with that.  That said, does Microsoft have what it takes to make their users "feel great"? 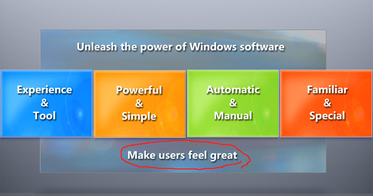 Note: visuals in this post are pulled from Microsoft and referenced with permission.