« Anna Nicole Was a Sticky Idea | Main | The Color of Passion »

February 12th, 2006:
My wife had taken the kids to Michigan to visit family.  I had the weekend to myself and decided this was going to be the time and place that I would launch my blog.  I had no idea what the heck I was doing—but a little voice inside my head said “why not?—let’s see what happens...”  What I did next is the same thing that over 55 million people now do on a regular basis.  I clicked this innocent-looking button:

Over time, this seemingly insignificant action would alter what I do for a living as well as how I live.
If I were asked to come up with a slogan for blogging, it would be this:

Blogging is like a box of chocolates.  You never know what you’re gonna get.

In many ways I approached personal publishing the way Forrest Gump approached living.  I didn’t do a lot of research studying the space other than reading a handful of blogs—and I certainly didn't overthink things.  At the time, I didn’t subscribe to feeds or even know what Technorati was.  I had never heard of the Cluetrain Manifesto, Naked Conversations or Creating Passionate Users.  I began blogging with what Roger von Oech calls a “Beginners Mind”.  And perhaps this is what has served me most faithfully over the past year.

Blogging, much like life—is a big box of assorted chocolates.  An international collection of different shapes, sizes and flavors ready to be sampled at any given moment.  We’re sharing ideas, creating, co-creating, mixing, mashing, interacting and even forming lots of chocolatey communities along the way.  I didn’t expect this part of blogging, but have been very pleasantly surprised that true community exists and is a tangible thing.  I’ve connected with many of you over the past year.  Some I’ve met in person and others through e-mail and even over the phone.

But there was another take-away for me through this whole experience.  A validation of a theory which I had no idea would go this far.  To be frank—I’m shocked (and delighted) that Logic + Emotion has picked up this much momentum in such little time.  I thought I would be communicating primarily to creative/design professionals but what ended up happening was that the audience here began defining itself.  Planners, Librarians, Marketers, Anthropologists, Technologists, Businesspeople, Entrepreneurs,—folks from all different kinds of bakgrounds (and countries) which I never expected would care about the content here started showing up and coming back.  Below is a simple visual which summarizes the current state of L+E if you go by the “numbers”: 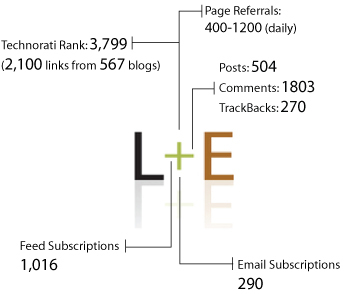 Though it’s not just about numbers of course.  My theory was that the social network just might be the ultimate manifestation of a “free market of ideas” meaning that anyone had a shot at being heard.  But with 55+ million blogs out there, chances are still slim that you will be "heard" by a sizable audience.  However, as I’ve said before—something funny happened on the way to the blogoshpere.  An average Joe like me—someone who has never written a formal whitepaper, nevermind a book can also have a say in things.  And neither permission nor a PHD is required.  This in my opinion is the true power of social media.  If you have something valuable to add to the conversation—you will be heard.  It's that simple.  And once you are heard—it then becomes your choice to either stay connected to the communities who live in this space, or participate from afar.

To some extent, I’ve chosen to stay connected because it feels right.  It’s meaningful and adds value to my life.  Though it doesn’t replace physical relationships—our digital interactions are all still very human.  And speaking of humanity, blogging has been a very human experience—at least for me it has.

No doubt many of you can relate to the story I am telling on this “birthday post”.  That’s the glue which holds participatory media together—we all go through similar phases though maybe at different times.  If you are reading this story as an “observer” rather than participant, you may only be grasping what I'm saying here with your head.  I’m confident you are an intelligent individual, so none of this is news to you.  But the core distinction between observation and participation is this:

Unless you experience something for yourself, you will only understand with your head and not your heart.

That’s the impact of participation through experience, and this brings me to the irony of the blog title—Logic + Emotion.  Initially, the title came from a blurb on my personal site.  I used that blurb as broad statement which applies to good design principals.  The hammer on my personal site represents an object which functions very effectively but is also appealing at the emotional level.  Logic + Emotion now has a entirely new meaning to me—as I’ve been influenced, educated, inspired, and touched in significant if not emotional ways through participation in this thing we call Social Media.

In short, 2006 has been a monumental year in many ways.  I can only say thank you to everyone who’s taken the time to read my words (and pictures), while sharing both their thoughts and hearts.

Gump was right.  I never knew what I was gonna get. 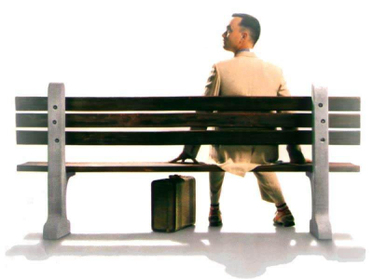 So if it's is a Birthday Party, here’s a little party favor.  I’ve gone through the bulk of my visuals and put them on PowerPoint slides which you can download here.  They’re ready to use in your presentations.  I only ask that you do the right thing in return, and provide a credit in some way that you deem appropriate.  And a special thank you to everyone who has used a visual and linked back here.

I have no definitive plans for 2007.  If the past year has taught me anything, it’s reminded me that blogging, like life has a way of working out differently from how you plan it.  It’s always good to plan, but you also need to improvise.  The magic happens somewhere in the middle.

In conclusion—thank you for a memorable year.