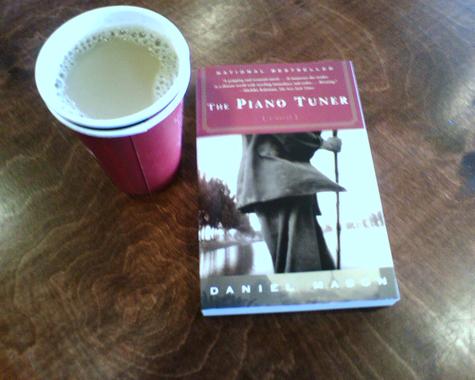 How often do we step into the shoes of others and what do we learn from it?  How often do we take ourselves out of our self-defined “comfort zones”?  A short while back, Roger von Oech and I were having a chat and he asked me how frequently I read fiction.  He was appalled to find out I didn’t and he was right to point out that I was missing out.  As I digested this—I thought to myself that as we travel down paths like this in life, they tend to be two way streets vs. one way, so I challenged Roger’s assumptions about some of the technology he has never used and has dismissed, namely Twitter.

So what I proposed was that we co-enter a “Analog-Digital Foreign Exchange Program”.  Over the next two weeks, I’ll be reading The Piano Tuner as recommended by Roger—it’s a fictional/fantasy based novel.  In turn, Roger will be using Twitter which he recently signed up for.  It’s going to be fun as each of us will report our findings at the end.  Who knows?  We’ll probably Twitter about it as well.  I’m sure of that.

But here’s the really cool thing I want to point out.  I am consistently impressed at Roger’s ability to have an open mind, a sense of humor the ability to be good sport.  He could have totally taken the position that reading a novel is time better spent than Twittering.  He’s got a lot more life experience than I do and yet he’s willing to be influenced as well as influence.  Imagine if brands acted more like this.

So here I am at a bricks and morters Borders book store with live people all around me.  I had to dig through the book shelves to find The Piano Tuner—there was no search box.  The soft-cover wad of paper feels odd in my hands. I'm a little out of my element.  :)

Roger thinks that I am getting the better end of the bargain, but who knows—maybe we’ll both come out of this with different perspectives?  Anyway, if you’re interested in following along, here is where you can find us on Twitter.