« Talking to Yourself | Main | My Last Post. Thank You for Everything. » 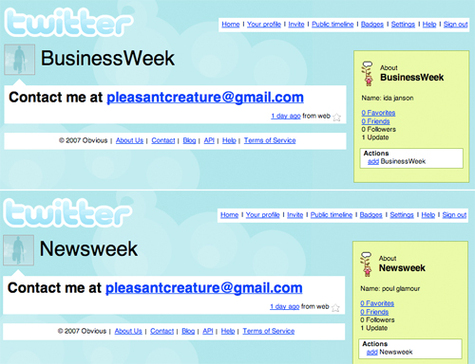 Anyone remember Pointcast?  If you do, you are showing your age. Pointcast was a service back in the early days of the internet that "pushed" content onto your computer desktop, browser etc.  As the Web evolved—so did the notion of "Push" as we've gone from push to pull (or maybe more accurately—push, pull + facilitate).

But as I continue to use Twitter—I can't help but wonder if "push" may indeed make a comeback of sorts.  Here's how.  I've been getting many of my headlnes via Twitter from MSM sources such as CNN, Wired, The BBC, and the NY Times.

who are on my feed list.  And of course I give the random personal updates when I'm in the mood.

Now take a look at the above picture.  Someone with the e-mail address "pleasantcreature" has gone and registered Twitter URLS for BusinessWeek, NewsWeek, MSNBC, CNBC,  and probably many more (these are the only ones I looked up).  There is currently no media content coming out of these URLS.  It's seems remarkably similar to what we witnessed years ago in the early days of the Web.  Remember seeing all the legal cases back then around claiming URLS?  Maybe you worked for a media company who had to shell out a couple of bucks to secure your Domain name.  When I first worked for the Chicago Tribune, the site URL was Chicago.tribune.com and was later changed to chicagotribune.com.  You do the math.  And I still recall all the efforts it took to announce the change in URL when we found out we could lose the extra "dot".  Let's just say it required a significant integrated marketing effort.

Meanwhile, some MSM publications such as  Fast Company and USAToday look like they have reserved a Twitter account even though there isn't content there (yet).  And even Fox News headlines are being pushed through the service.

I digress.  The point of this post isn't about Twitter or even about the MSM.  It is however, about how our behaviors continue to change and evolve along with the ever-shifting media landscape.  I now recieve many of my news updates through Twitter.  For me personally, it's convenient.  I like the "push"—when the news comes to me vs. me going to the news.  It saves me time since it arrives in a "channel" I'm using on a regular basis.

Maybe Twitter will implode as some people predict.  Maybe it won't.  Or maybe it will be replaced by something bigger and better.  Either way, if I were a member of the MSM, I'd be thinking about how to incorporate these types of services in my distribution mix.  Some of us still bookmark sites, others subscribe to feeds, some rely on mobile or some other modes of media transportation that take us away from our PC's.

Whatever you want to take away from this post—I'd say one thing seems crystal clear.  Media consumption is not a one-size-fits-all model and I can't think of a downside to "staking your claim" early on vs. waiting for the dust to settle.  Maybe that's what we can call "media in beta".