The End of Thought Leadership (As We Know It) 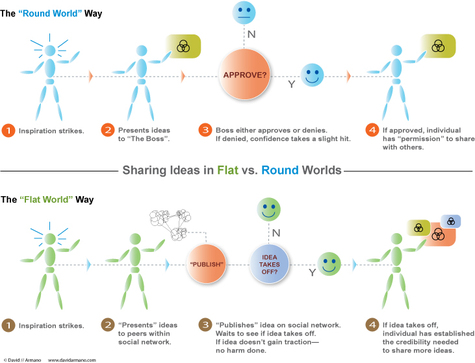 Thanks to Karl Long, I got a early heads up that my BusinessWeek article has already gone live.  The title is "It's The Conversation Economy, Stupid": go and check it out if you have a few minutes to spare.  And special thanks to Helen Walters from BusinessWeek who did some fantastic editing on the piece.  I really enjoyed that process, and it made the writing much better.

But I'd like to talk about something else that is both directly and indirectly linked to the conversation economy.  The diagram associated with this post basically illustrates two possible paths that one can take in pursuit of becoming a "thought leader".  In my visual I describe these two paths as the "round world" way and "flat world" way.  The point of this visual is to illustrate the different types of behavior one can take to help spread the idea virus.

If you are a regular reader of this blog, then you already know which path I have chosen.  Prior to starting Logic + Emotion as I've stated before—I had never written a whitepaper.  In fact, I once wrote a draft for one which never made it past the "formal process".  With only an undergrad degree in Design—I  don't have an academia pedigree, and it's only been recently (post blog) that I've developed an extensive network.  I certainly had no relationships with the MSM, and I was not hired at Digitas to bring any thought leadership to the table—I was hired to be a Creative Director.  My everyday job responsibilities (which I seldom discuss here) are very much focused around using my abilities as a director to serve our clients.  Think about this in contrast to individuals who are brought into an organization where thought leadership is part of their job.  In the "flat world" way they work with their internal PR folks to publish content and make appearances.  It's a coordinated affair.

What I'm trying to say here is that this all may be changing.  I've bucked the system, just as I'm sure that many of you have as well.  In the conversation economy, dialogue rules.  Monologue, and rehearsed presentations play second fiddle.  An academic or corporate pedigree is nice—but really doesn't matter.  If you have something valuable to say and you are willing to listen, share and participate—then you have the opportunity to "submit" your ideas and be heard.

These are the new rules of the conversation age, or economy or whatever you want to call it.  This is why, if you  have adverse reactions when you hear strange words like "blogging" or "twittering"—then you are a fool.  I'm sorry but it's true.  I'm not saying that we should all jump on the bandwagon of the latest buzzword or technology that gets thrown out there.  I'm actually saying the opposite.  We need to investigate the latest tools to the best of our abilities and decide how they impact our own worlds.  The blogging movement was never about blogging in the first place—it's about a new way to share, connect, collaborate, discuss, debate, and ideate.

It's always been about us.  About people.  Eliminate the word "blog" from your vocabulary and you are still left with the power of personal publishing and content distribution.  These ideals will never go away—they are hear to stay.  This is not a fad.

So back to my original point.  How is thought leadership changing?  Thought leadership can now come from anywhere.  We don't need to work with PR.  We are PR.  If we can't schmooze at events Because it's not "part of our job"—we will schmooze virtually.  Our networks will be formed digitally.  What good is a PHD if we can only lecture and not facilitate a meaningful dialogue?  Have you ever met an individual with Aspergers?  They are usually highly intelligent—some are in the genius realm.  But they often struggle with social graces, nuances and conversation outside their areas of expertise.  Monologue isn't difficult, but social interactions can tend to be a one-way street.  Sometimes I feel like traditional marketing and to some extent thought leadership is like a form of Aspergers—the interactions are a bit narrowly focused on getting their own viewpoint across and it's slightly awkward when things get informal.

I believe that the "flat world" path to thought leadership will not go away.  Corporations will still implement formal processes that require defined parameters and requirements.  Some will say "yes, you can do this" to some while others say "no, you can't—it's not part of your job".  Academia will continue to play a vital role.  Schmoozing at the conferences and "being seen" alongside the right people will always be a part of our social fabric.  We are social beings.  But I do believe that another path exists which extends opportunities do those of us who don't have the connections.  Or at least don't start out that way.  We will build our foundations digitally.  Our "connections" will begin here and move their way into the physical world.  Our relationships will be formed purely out of merit—from what we have to offer and what we are willing to share.  These relationships will strengthen and evolve as we develop them outside of our digital networks.  And some mainstream organizations may take notice.

This brings me to the BusinessWeek article.  It wouldn't have been possible without the technology of personal publishing (AKA blogging).  I've been able to leverage this platform to make my own rules as opposed to playing by the flat word rules.  Like I said, I'm not the only one.   I guess that leaves us all with the question of "now what"?  And I don't have an answer.  Actually, I have the same question.  I just wonder what will happen when there are more stories like mine that pop up all over the place.  What then?  Will we be accepted—or "encouraged" to forsake the flat world path for the traditional round world way?  What do you think?