How Old is Your Brain?

It's Friday.  Everyone seems to be talking about Coke in Second Life.  That's great.  But I'd like to talk about a subject even more dear to my heart.  Two of my favorite thinkers recently got together for a chat.  Author and inventor Roger von Oech and BusinessWeek's Bruce Nussbaum.  Roger is 59 years old.  Bruce is 60.  One of the priceless things about my blogging experience is the access I now have to minds like this.  Roger and I connect fairly regularly and Bruce and I correspond every once in a while.

But I don't want to talk about their age or my relationships as much as I want to point out something that I feel these individuals have in common.  In my opinion, based on my interactions with both Roger and Bruce—I believe both posses very rare minds which I would describe as "young brains".  Each time i interact with and observe Roger and Bruce I see the willingness to experiment.  To take risks.  To speak their minds and say what they really mean.  To be open to other points of view regardless of the source.

For example—whenever I talk with Roger, he tends to ask a lot of questions.  The only other person who asks me more questions than he does is my six-year-old!  And the way Roger took to blogging was fascinating to watch.  He experimented, tried out different things, tinkered etc.  Bruce has been interesting to observe as well—as someone who's been around the block a few times, he's met all kinds of important people through his career as a journalist.  But from Bruce's writing's, I don't get the sense that he's easily impressed.  I often think about how my boys would react if they met someone famous.  They would be unimpressed too.  Oprah or Bono would be just another "grown-up" to them.  And as Roger mentions in his write-up about their meeting, Bruce has gradually been modifying his blogging style on BusinessWeek.  He's engaged his audience a bit more.  I've seen comments from him on other blogs.  He's allowed himself to be influenced and as a result his behaviors have been altered.  I believe he's "un-learned" some habits that no doubt have served him well in the past. 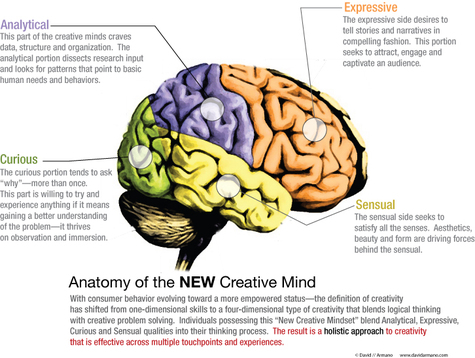 My point is this.  In the past, I've worked with inflexible people who are set in their ways.  I'm sure we all have.  The thing is that these folks were much younger than Roger and Bruce.  But their brains didn't always reflect this .  They possessed "old brains".  Brains which crave the familiar.  The routine.  The status quo.  Brains that tell them that they know what's best because of their past experiences.  One of the things that blows me away about people like Roger and Bruce is that they think and act a little differently.  They take in viewpoints from not only peers, but from people outside their immediate circles.  In my opinion, they posses "young brains"—not so different from the kind of mindset I describe above.  I'm inspired to do what it takes to keep my own neurological clock from ticking along too quickly.  Maybe I can turn back the clock a little.  Maybe we all can.