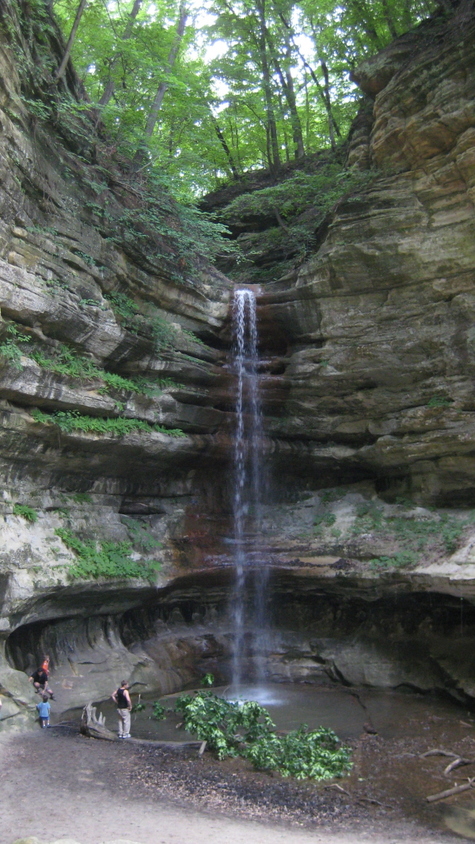 My brief respite in between jobs is just about over.  Here's a few thoughts while my brain is still in "vacation mode".

1. Recreation is what you make it
The photo that goes with this post was taken at Starved Rock state park near Utica IL. It's one of the natural waterfalls that are situated through the numerous sandstone canyons throughout the park. We took the photo on our second trip there (I'm the small black speck near the orange and blue specs over to the left). Our first trip was short lived due to both boys getting really sick. But I learned an important lesson in all this. By choosing a destination only two hours away, we were able to re-visit and pick up where we left off.  If life is in beta, so is recreation. And though we weren't far from Chicago we might as well have been exploring the forests and caverns of South America.  A little imagination and a lot of relaxation can go a long way if you let it.

3. Take pictures
We took some pictures and video. We didn't overdo it. But I'm not the most proactive at taking pictures when having fun. Probably because I like "living in the moment". But occasionally you gotta capture those moments. You won't regret it.

4. Savor everything
Sometimes simple meals like Fish-n-Chips and a slab of ribs can be gourmet experiences when the setting and company is right. We had some great meals in good company while overlooking wonderful scenery.

5. Be spontaneous
One of my favorite moments was sharing a motorbike ride with my wife. She usually shuns doing this with me for safety reasons which I totally understand. But one afternoon she surprised me with the idea of hopping on the bike. So we rode off a couple of towns over, dined outdoors and rode back. It was an unexpected treat and one I won't forget.