« Specialist or Generalist? | Main | Upcoming Events. See you there. »

CM Comrade Scott Weisbrod points us to a Forrester report that proclaims the death of the traditional marketing funnel.  OK, I buy that—the proliferation of interactive technologies had altered consumer behavior.  The funnel may not be as relevant as it once was.  The report suggests that engagement is becoming an increasingly important metric to measure:

"Engagement goes beyond reach and frequency to measure people’s real feelings about brands. It starts with their own brand relationship and continues as they extend that relationship to other customers. As a customer’s participation with a brand deepens from site use and purchases (involvement and interaction) to affinity and championing (intimacy and influence), measuring and acting on engagement becomes more critical to understanding customers’ intentions. The four parts of engagement build on each other to make a holistic picture."

You can take a look at how they propose to measure engagement in four parts here.

But it's this visual above—the maze like funnel that I don't entirely get.  I think it's supposed to show that unlike the traditional funnel, digital technologies have made what was once a linear path—well, less linear.

But what if it wasn't a path at all—nor a funnel that begins wide and ends narrow.  What if consumer behavior is more like a spiral that begins with an interaction as opposed to a communication.  And what if the spiral amplifies the more the consumer engages.  From interaction, to engagement, to participation, to conversation to affinity to community?  What would that look like?

Messing with the traditional funnel is like treading on sacred ground.  But I don't think the "Spiral" is that far off.  Think about it:  Often times our first interaction with a brand is through a digital touch point like a site.  Maybe we heard about it from a friend or somewhere else.  We interact with it—we give it a try.  If we like it—that leads to deeper levels of engagement.  Maybe this repeats itself adding more "cycles" to the spiral.  We continue to engage.  Some of us even begin to participate.  We transition from downloading to uploading our media.  We talk about how great the experience is.  To our peers, to each other.  We become evangelists—the spiral actually expands as we engage with multiple touchpoints—not only the digital ones.

All of this adds up to a positive associations with whoever is responsible for providing the excellent experience.  We come together with others who feel the same way.  We instantly bond with them over our shared interests and experiences.  Community forms.  Then one day, someone who's never tried brand or service X hears about it from a friend.  A member of some community.  They fire up their digital device of choice and the interaction begins once again—a new spiral is formed.

This post came together rather quickly—so the marketing spiral could be way off.  But I thought it would be worth a shot.

Update, or maybe the funnel simply gets flipped? (compliments of Brandon Murphy) 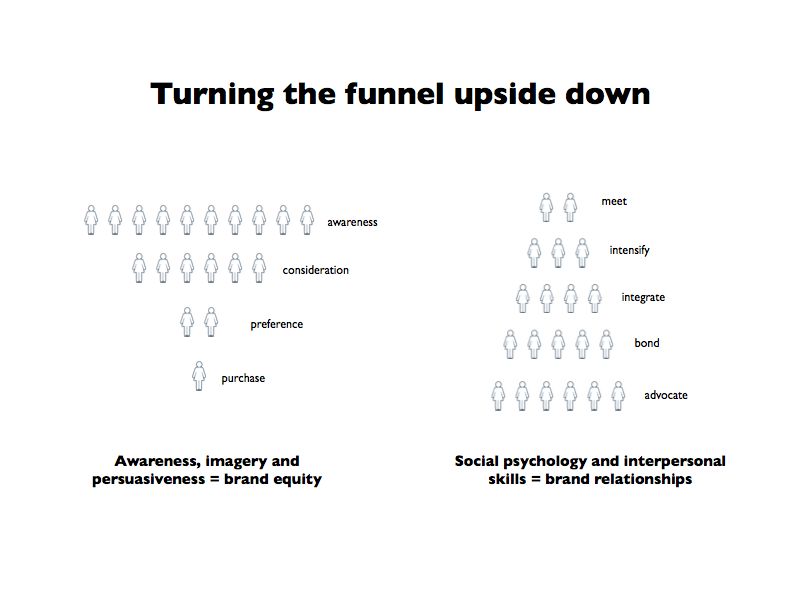