« Twitter is Down. Digital Conversationalists Left Speechless. | Main | Dear Twitterati. You're A Bunch of Lunatics. »

Update:
Tip of the hat to Ryan.  The story is now national and CNN has video footage.

Update:
The teen who grabbed the woman out of the car is Tommy Foust.  Read more about it here.  Would be nice if this got more than local coverage--we all need to hear about more stories like this.

A few hours ago I witnessed something incredible.

While riding my motorbike I pulled up to a red light adjacent to a train crossing minutes from my home in Glenview IL.  Across the intersection I could make out a few teenagers running across the tracks.  There was something on the tracks—it appeared to be a car, but I couldn't be sure.  The next thing I knew the train crossing lit up and the guards went down.

It all happened within seconds.

I saw 2 young men dash away from the car and literally dive into the weeds next to the tracks.  They were holding something.  SECONDS later—no more than 5 or so, TWO diesel trains ripped the car to shreds.  It might have been a scene out of a movie.  I pulled over my bike to where the teenagers were and two boys emerged from the weeds carrying an elderly woman.  Turns out she mistakingly made a right turn on the tracks and ended up facing an ongoing train.  Her car was stuck on the tracks and she was disoriented.

You won't find any of these details on the story that recently went up on the Chicago Tribune because they are most likely fact checking.   But I was there, and I captured what I saw with my own eyes via Twitter.  There are some very special heroes out there that may be getting some attention from the press in the days to come.  I went up to those young men and could only say this:

"You did something good here—you did the right thing" 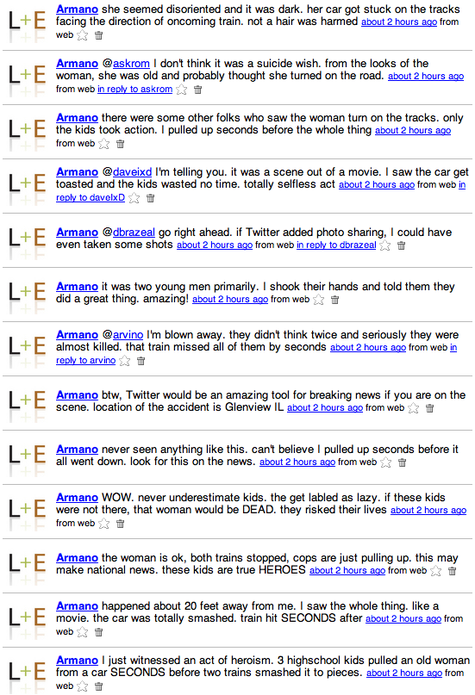 ...And for the rest of us, I'll say this:
Heroes still exist—and the real ones aren't on a television show and don't have special powers, they're people like you and me.  Those were a couple of brave kids.  They cheated death by SECONDS.  They didn't think, they acted.  Tonight, there's a family and possibly some grandchildren out there who can be very thankful that a couple of outstanding young adults "did the right thing".