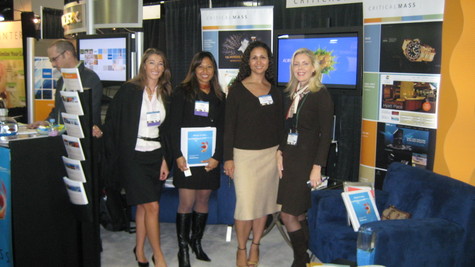 The best thing about being about being in a beta state of mind is that you learn by doing, and you get better.  The Forrester Consumer Forum was an action packed couple of days for me—just ask Karl Long.  Apparently the highlight for some was the improptu video interview we did with Ze Frank (yes I screwed up his name).  But Weblebrities aside—I learned a great deal from our participation at Forrester's Consumer Forum.  Here's a few thoughts:

The Best Buzz Comes From Great Experiences
We got some great buzz off the combination off our "Social Media Dashboard", our themed booth, the Age of Conversation Books, the Swedish Fish, and our "Beta Score" handouts.  Bottom line is that we had an amazing team who busted their butts to make all of this come together and our intention wasn't to go "viral"—it was to provide a great experience for the folks who interacted with us.  Word is that we did alright—and it took a heck of a lot of work to pull it off.  The two photos above show just a few of the folks who made it all come together.

Life in Beta = Learning by Doing
Josh Bernoff made a simple but powerful point.  He stressed the importance for marketers to understand the changes by digging in themselves.  At age 48 Josh says, "if I can do it, anyone can".  I'll take it even one step further—if we don't learn by doing we'll be limiting ourselves to a life of theory—and theory doesn't always lead to reality.  I learned a great deal by working our "beta cam".  In retrospect, I would have spent more time playing with Ustream prior to the event so I would have felt more comfortable recording interviews.  I only got the hang of it by the second day—but that's what beta is all about.  You do, you learn—then you do some more.

Imperfection is the New Perfection

"Don't expect too much from me
Perfection is no test for me
Because the best I'll ever be
Is just like you: A human being
You won't offend, I need to know
Please, my friend, show me your soul"
~The Red Hot Chili Peppers

That's Manish Mehta from Dell, Deb Schultz from the blogoshphere and The Age of Conversation.  Dell's not a perfect company.  Deb's not a perfect blogger (pretty close though :-).  The AoC isn't a perfect book—but it's all good.  Forrester's Groundswell Award winners aren't perfectly polished pieces of art.  But they all have one thing in common.  Each example serves a purpose.  Each provides some form of relevant value to the user and the broader community.  Each is meaningful in it's own way.  Most likely, each example is also  imperfect in some way—which is OK, because that's what beta is all about.  As Marketers move forward in their desire to connect with consumers—they'll have to trade vanity for value.  Customers will forgive an imperfect experience if they know the brand behind it really cares.  What they won't forgive is being fooled.

We Won't Get Fooled Again
At the end of Charlene Li's presentation, she played a sound bite from "Power to the People".  Good choice.  But if it were my show—I would have chosen The Who's "Won't Get Fooled Again".  Nevertheless, one thing's for sure—when Forrester dedicates an entire forum to the topic of social media and related subjects, you know it's gone mainstream.  We're not fooling around anymore...   :-)