See You At Recruit ID 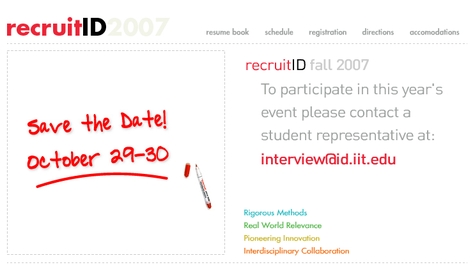 Next week, I'll be teaming up with colleague David Stallsmith along with a few other CM citizens and we will be descending upon IIT's Institute of Design for Recruit ID—their Fall recruiting event.  I won't be there Monday—but I will be there all day Tuesday and David and I will be co-presenting some insightful + fuzzy thinking combined with a dash of synthesis :)

My relationship with the school began in 2003 with my attendance of the HITS conference—for me, that was a transformational event.  I felt a sense of belonging that I could not describe and directly related my experience in digitally based user centered design to the themes which emerged from that conference.  Since HITS, I have attended every IIT strategy conference that has been put on—it's the one conference I never miss.  It was at the '06 strategy conference when I first heard Bruce Nussbaum talk (video).  His rally cry for innovation and the marriage between business + design struck a chord with me and has never left.  This explains a lot doesn't it?  In fact—to some degree it explains the purpose of this blog.

I've also met some great people who have graduated from ID.  Many have blogs.  Chris Bernard, Sara Cantor, Nate Burgos, Zachary Jean Paradis to name a few.  And some who are new students—like Jon Campbell who I recently broke bread with a couple of days ago.  Great guy.

Many of the students who go to schools like IIT's Institute of Design dream of careers in places such as IDEO, Apple and Google.  All good.  But sometimes innovation can happen even under the collective umbrella of marketing and IT.  In fact, I'd argue that much of the innovation we are seeing in our time is coming from the Facebook, YouTube and Twitter creators of the world.  In my professional experience—I've led the efforts for conceptual prototypes that broke the web page convention, interactions that come to your desktop and I've snuck video cameras in places you're not supposed to take them, just to get a better understanding of people and things.

Yup, I'm looking forward to chatting to some ID students.  Always feels like a home away from home.  Hope to see you there.