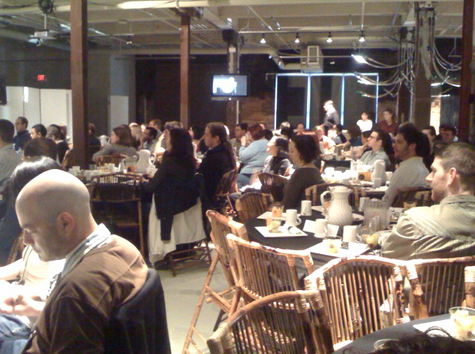 Alan Cooper, widely respected in the field of Interaction Design and related practices kicked off Interaction 08 with a simple but profound message.

Alan laid out his case thoughtfully and practically.  We are living in a post industrial wold.  Knowledge workers such as programmers live in conflict with the business hierarchies who manage them.  Programmers don't respect authority—they respect credibility.  And so from Alan's perspective—Interaction Designers who can "think in blueprints" possess that credibility.  So I'm going to make the leap that what's being said here is that Interaction Designers form a significant "link" that make "best of market" possible.

All sounds good.  I believe in the concept of "best to market"—you only have to look at the U.S. and our predisposition to invent—only to have other nations take what was invented and provide "best to market" products and experiences.  Henry Ford knows this concept well—Ford's invention of the mass production automobile was "first to market"—yet you only need look at the automotive market place to see how that story demonstrated that "best of market" wins in the long run.

My take on Cooper's talk—is that while I agree wholeheartedly with the "best of market" scenario, I see another story being told when it comes to social applications.  Can You Tube, Twitter, Facebook, Slideshare, etc. be put into the "first to market" category?  It's debatable.  But most of the social applications to seem to rely on community influenced iterative design that often came after a "first to market" reality.  Social applications may be destined to follow what Cooper is advocating for which is an emphasis on craft and rigor.  The theory is simple—better craft leads to better business models.

Now the one example outside of social applications that I can think of that defies this perspective is Tivo.  In my opinion Tivo was as superior DVR that combined both "first to market" and "best to market".  But even with these advantages, Tivo stumbled.

Big topic here—and I certainly don't have the answers.  But I believe that watching what happens to the Tivo's, You Tubes and Yahoo!'s of the world are will help provide clues as we continue to navigate through the space.