Interaction 08 In a Word: Better

As a self-proclaimed synthesizer, I'm always on the lookout for patterns.  There were lots of them at Interaction 08 which just wrapped up over the weekend.  The first pattern was the obvious—everyone there seemed to experience a type of "euphoria" which came from the realization of what they are.

'I'm an interaction designer—and this is what it means—and these people share my values".

The people at interaction 08 came from a number of different backgrounds.  Graphic design, Information Architecture, Industrial Design, Programming, Development,  Web Design, and others that I'm probably missing.  Everyone seemed to share the same struggle—what exactly do we call what we do and how do we evalngilize the value we provide?

And that's exactly what the conference and more importantly the IXDA community is all about.  But there was another pattern that I was interested in.  From Bill Buxton, to Gretchen Anderson, to Chris Conley, to Sarah Allen and even myself—there were clues that interaction design is more than just a practice, it's an integral part of a much bigger ecosystem in which the sum of the parts is ultimately more influential than the individual parts.

For me, the unofficial theme of the event was designing the holistic experience, which can include interaction, drama, storytelling, utility, community, purpose, and many other qualities that add meaning to our lives.  The above visual which I've borrowed from Kevin Mullet captures some of this holistic thinking nicely.  It's the combination of design, engineering and marketing which really matters.  It's the intersections if usefulness, usability and desirability that matter—not putting the emphasis of one over another.

—but what we call it is less important that actually doing it.  In fact, while I was happy to see that people at the conference were identifying themselves as "interaction designers"—I didn't want to lose sight of the fact that while this is important—what's also important is thinking about how what we do fits into the bigger picture.

At the beginning of my talk—I said that I wasn't sure what to call myself.  But this doesn't mean I don't know who I am or what my role is in the world of creativity, design and interaction.  As interaction designers—or whatever we want to call ourselves, our goal should be to make things better.  We can make people feel less frustrated, more empowered and confident.  We can make people more productive, less stressed.  We can actually make lives better.

For me—interaction 08 in a word is better.

Better means more integration with technology—with marketing and even sales.  Better means thinking + doing.  Better means improving craft as well as ideation.  Better means reaching out to other disciplines and making connections that will lead to better experiences.

Like Mullet's diagram above—I came to similar conclusions as I pondered the role of experience design within the agency ecosystem.  I started with a sort of hub and spoke model—but then evolved to the "clover" metaphor.  For me, Experience Design was a part of the bigger living organism: 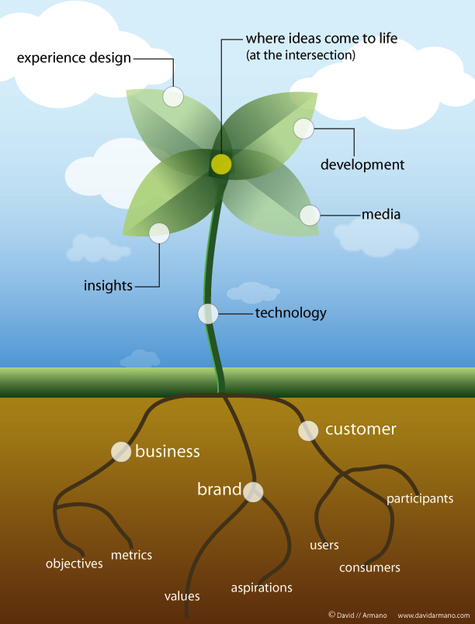 In the end, for me—Interaction 08 was a better way to move a discipline forward.  Like many of the attendees—I've found myself relating to this group more so than other organizations.  I guess that's a good start.  Or maybe it's just better.