« My Vegas is Showing: Brand Utility + Event Based Social Networking | Main | Thinking Through The "3 U's"... »

The 3 U's: A Model for "Advertising" in the App Economy 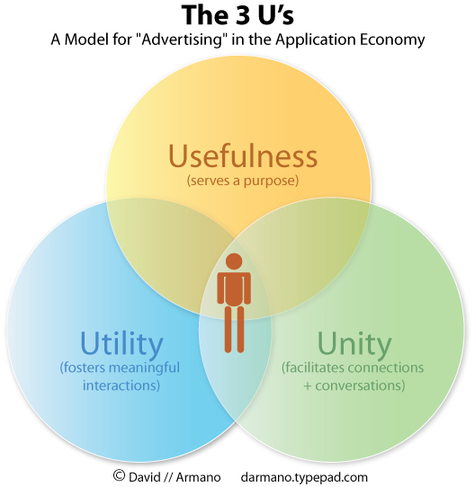 BusinessWeek's Bruce Nussbaum recently wrote a terrific post in which he dissects the effects of social media in the business world.  In part of his write up, he analyzes the My Vegas effort.  While of course I think that's great—what he says here really stuck with me:

"In a world of social networking and conversations among bloggers, consumers and everyone else, you don't advertise to them, you advertise with them. So companies have to design spaces--or politically ask to join existing networks--where people have a purpose to pursue (if only fun). Las Vegas is a prototype where people can network before, during and after an experience--going to Vegas baby!

Think of creating these kinds of event social networks around weddings, graduations, bat mitzvahs, grandpas 90th and mom and dad's 50 wedding anniversary--any ceremonial event. And put it on iPhones, please--mobility is pretty critical.

This little discussion moved from blogs and social networking to utility and usefulness. I'll say more on this soon because I think the entire advertising/marketing and /media/journalism industries are being reshaped by digital tools empowering individuals around the world."

And this of course inspired me to talk about what I like to call the "3 U's".  Here's how it breaks down:

Usefulness
Any experience is useful when it's meaningful and serves a purpose.  Currently much of marketing still breaks down into self-serving gimmicks and interruptions that offer little value.  Much of what's offered in digital is no exception.  While the majority of criticism is of traditional advertising, the fact of the matter is that interruptive based traditional digital advertising is not much better.  These are the digital gimmicks that work to get your attention but are usually done so poorly that they offer no value whatsoever.  Usefulness is the exact opposite.

Utility
Utility = interaction that delights us in some way.  But hold the iPhone.  The industry has hijacked the word delight and brainwashed us to think that only companies like Apple and Disney are capable of serving it up.  Let me tell you a story about the "no-frills" Craigslist, which just happened this morning.  My wife took pictures of a large playset we wanted to sell.  She uploaded them at 10:00 A.M.  By noon, she had several people interested and she sold the set in time for a late lunch.  We had the set dismantled, picked up and were $100.00 richer that evening.  That's delight in the application economy.

Unity
The promise of social features being designed into experiences is that it somehow brings us together in a fragmented world.  Even though we are all interacting through multiple social channels—we can now find people like ourselves who we trust and see what they like and dislike.  This influences our decisions from the stuff we buy to the things we recommend.  The best marketing in the world tries to simulate this, but usually ends up coming off as contrived.  We unite when we act in ways that were informed by groups of people who we trust.

So it's an easy way to look at a complex subject.  The subject of how technology continues to influence our behavior.  I don't know about you—but I use the Web very differently than I did 5 years ago.  See that little guy in the middle of the visual?  That's the evolving customer/consumer/user/participant.  Digital marketers who are using the same tactics that have worked in the past really need to think about that.