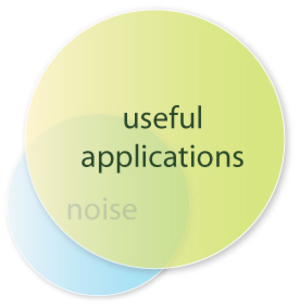 Over at Forrester's Groundswell blog, Josh Bernoff recently wrote this in the context of social applications doing well in a recession:

"I say social applications and not social media for a reason. People will want to boost word of mouth in a recession. This is great news if you're selling community apps to companies. It's also good news for Facebook community applications and groups. You're a company and you want to charge up your citizen marketers about your product -- you can build your own application or climb on board an existing network and work within it."

I think he's right.  But I want to take a step back even further—I don't think it's just about social applications doing well in a recession as much as it is that useful online applications (not just social) could really be the biggest threat to both traditional advertising and what I like to call traditional digital advertising.  I owe this post to my wife, who's online behavior inspired it.  As a stay at home mom and "middle of the road" internet user, here's how she typically spends a day online:

It's The Application Economy, Stupid.
My wife never clicks on an Ad banner.  She gets annoyed by talking people who pop up on her screen and she only watches shows on our DVR and skips commercials.  While she doesn't use Facebook, Flickr, Twitter, Myspace or other social applications—she does spend the majority of her time on sites, or "web applications".  For advertisers, the enemy isn't social media as much as it is that she chooses to spend her time on applications she finds useful.  Everything else is noise.  Everything else is something to be ignored.

The biggest threat to advertising is useful.  It's that simple.  Useful is a time and attention grabber.  It takes away from most forms of marketing.  Useful as Webkinz shows us can also entertain—but to my wife, it's useful because it's quality time spent with the boys.

It's truly the application economy.  Social applications included—but as my wife's scenario indicates, it's the application part that really matters as many internet users are still not active participants in social media.  So marketers are indeed faced with a challenge.  Continue to cram Ads (noise) into multiple digital platforms (phones, web, GPS—anything with a screen)—or they can try to figure out how to be useful.   Right now—the marketing industry is at war with the people who create useful experiences.  These experiences "distract" us—more accurately, they reward us.  The application economy is as "un-sexy" as it sounds—and that's exactly why advertising needs to take it seriously.