« Thought of the Day | Main | Wanted, Panel for this Topic: "Beyond Gimmicks" »

The Age of Improvisation 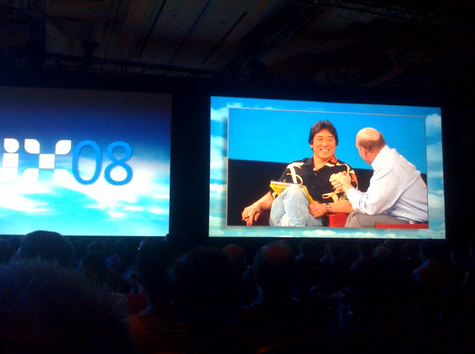 "Last week I had the opportunity to Speak at Microsoft’s premiere event, MIX 08 (you can see my talk here, and watch a video interview here). But the real star of MIX 08 was Guy Kawasaki. Guy spent a considerable part of his career with Apple, but is currently most known for his adventures as a serial entrepreneur and blogger. But Guy is something much bigger. He’s a master at the art of improvisation among other things.

Contrast Guy’s performance with that of BusinessWeek’s Sarah Lacy whose highly publicized fiasco at geek conference SXSW will go down in conference history. While Guy remained relaxed, conversational and quick on his feet even as Ballmer unexpectedly tossed Guy’s Mac Air around like a play toy—Lacy was unable to successfully adapt to her situation when the SXSW audience began to turn on her."