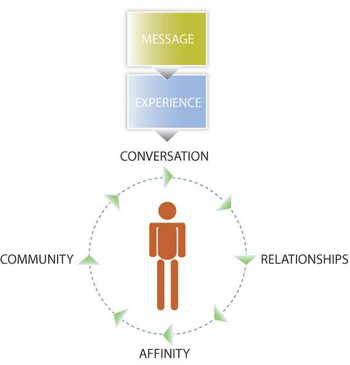 It's been nearly one year since I wrote "It's The Conversation Economy, Stupid" for BusinessWeek. Thought it might be fun to pull a few thoughts and see if they are still relevant today.  What do you think—is it still the conversation economy, or have we moved on?

On Advertising to "Consumers"
"Once upon a time, we were consumers. We consumed things. We took in the messages that were communicated to us. We didn't really get to talk back. If we had a good or bad experience with a product or service—we told a friend. Maybe that friend told a friend. Maybe, just like the shampoo commercial from advertising's golden age, "They'll tell two friends, and they'll tell two friends, and so on, and so on…." Marketers are finding themselves in an increasingly frantic race to get people talking about their brands. The desire to produce something "viral" is nearly ubiquitous in the marketing world. But it's unclear who exactly "consumers" are these days."...

On Bud.TV
"But great experiences aren't enough. It's entirely possible to design and develop a rich, immersive, experiential Web site, only to have light traffic and little return on investment. Bud.TV, for example, is falling short of its goal of 2 million to 3 million monthly visits. Many fault the registration process. In spite of a slick interface and highly produced video, Anheuser-Busch (BUD) doesn't seem to be reaping what was sown. Why?"

On Twitter
"But why is Twitter so hyped? Why all the fuss? I believe it's because Twitter has evolved from a simple service that initially allowed users to express mundane thoughts into a robust "conversation ecosystem."

On Traditional Marketing
"Conversation architects move marketing beyond the idea of one-way messaging. Traditional marketing efforts were founded on this tried-and-true format and are still prevalent within the industry. Consider the example of a typical creative brief template, which usually says something like, "What are we trying to communicate?" Can you see the old-world residue in the word "communicate"? It lacks the dimensions of experiencing something and having an ongoing two-way dialogue."

On Dell
"I've personally witnessed Dell's change of heart in the form of an unsolicited comment on my blog from a Dell employee in regard to a post I had written about my experience talking at Loyola University. I had asked the graduate students there whether they had heard of Dell Hell (approximately 90% of them had not). But that didn't stop Dell from hearing what I said."