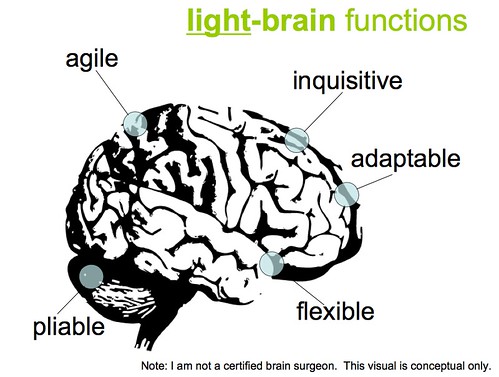 I'm really fatigued by the whole left brained/right brained debate—while I think it's worth debating, it's not the issue of our time.  I believe the issue of our time is how quickly we can successfully adapt in an era of rapid and dramatic change.  Anyone who's worked in technology related fields understands this—only the difference is that technology's effect has permeated nearly every nation in the industrialized world.  It's like breathing now.

This is what was at the core of my "Fuzzy Tail" POV from which the above visual was pulled.  Each time I think about how overwhelming change is—I remind myself that the qualities outlined in the visual are becoming the critical soft skills that will allow individuals and business not to merely survive—but thrive.

That said, I look around and realize that while change appears to be rapid—we still tend do things the way it's always worked for us in the past.  This may be the dilemma of our time.  Either way, it's still worth assessing your "light brained" qualities.  If you have them, worst case scenario—you'll be able to utilize them when needed. If you don't—it might be worth taking the time to do or learn something new.  Maybe it's something you don't really understand and it makes you nervous. If so, all the more reason to take it on.  So Are you left brained?  Are your right brained?  Are you a little of both?

Don't forget about being light brained.