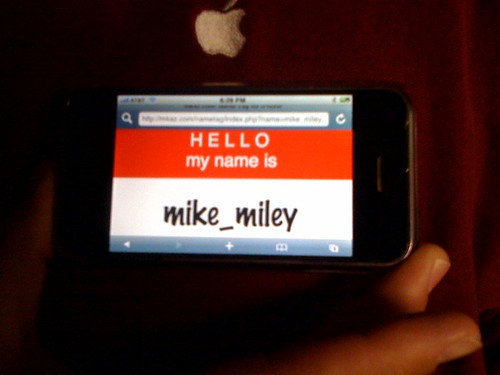 Update: Coverage on our panel in Ad Age (Digital Next)
Last week I went to a local gathering in Chicago where people in the industry were meeting informally over a few drinks.  It's the typical scenerio that we keep seeing more of—most people had been meeting for the first time even though they had heard of each other from some type of social network or another such as Twitter.

Mike, an Apple employee was one of the first to greet me—and he extended a simple gesture.  As he introduced himself he held up his iPhone which was displaying a digital name tag generated on the Web that he had just personalized moments ago.  Within minutes, nearly half of the attendees of this small gathering were doing the same.  it had gone "viral" so to speak—each person found our where they could customize their own "badge" and some were even adding "@" symbols so that their "Twitter friends" could recognize who they were.

And this I thought was a simple but relevant example of how we are having "micro-interactions" in ways that we we can take with us.

Today I'm moderating a panel on this very topic with Steve Rubel, Ian Shafer, Matt Dickman, Stephanie Agresta, And David Malouf.  It should be a lot of fun as we'll be discussing how indivisuals and brands are making content and functionality "micro" and designing it "to-go".  And of course a conference like this had to have both an iPhone and a Widget version (below).  If you are going to the event, hope to see you there. 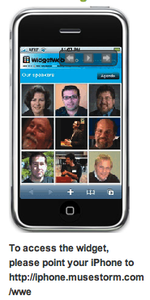