5 Things I learned From Dave Gray 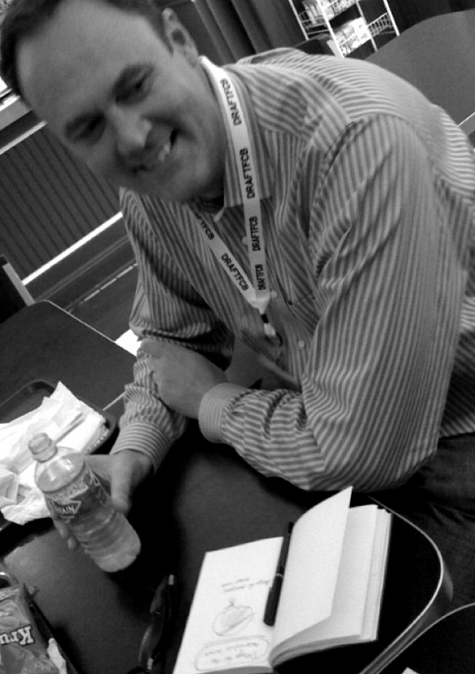 I just wrapped up 2 days at the IDEA conference in Chicago and one of the highlights for me was getting to spend some time with Dave Gray, founder of XPLANE and a wonderful advocate for visual thinking.  One thing you should know about me is that I watch people very carefully and make mental notes about what I can learn about them.  Here are a few things I picked up:

It's The Delivery Stupid
Dave's talk at IDEA was very good—he explored the notion of analog benefits which have not yet translated digitally (for example comparing books and browsers), but aside from an interesting topic, what I noticed most about Dave's talk was that his delivery of it really made it extraordinary.  Dave's spontaneity, conversational style, enegry and  animation were instantly picked up by the audience. They fed off him, and in return he fed of them, and the amount of chatter going on in the back channel served as proof.

Show And Tell
I watched as Dave took notes and drew everything in his notebook. If he wasn't jotting something down as you were talking to him, he was pulling out his notebook to SHOW you something he was either thinking about or start drawing as he discussed something with you. A conversation with Dave was like an exercise in interactive show and tell.

Use What You Got
If Dave didn't have his notebook on him, he'd write something down on his hands and even in one case, his arm.  I watched Dave do this more than once. The true sign of someone who understands improvisation—you use what you have as opposed to trying to create the perfect environment.

Smile
Dave is well over 6'5" and has a deep voice that easily carries. Yet he's not intimidating when he easily could be. Why? Because he's inquisitive and generally smiles a LOT. It's a great quality and instantly disarming.  Watching Dave taught me that you can be smart, talented AND approachable.

Stand Corrected
Smack in the middle of Dave's talk—someone from the audience challenged him on something he had just said.  Dave had invited people to to this at the beginning of his talk and responded by saying "I stand corrected".  By Dave not only inviting the critique and giving it credibility, he was able to quickly move on with out disrupting the flow of his talk. And the audience responded even more positively for it.

So that's what I learned. And if you're open to a tip from your truly, consider this: don't always listen to what people say. Watch what they do—and how they do it. The insights you get from all three are more potent that just one.