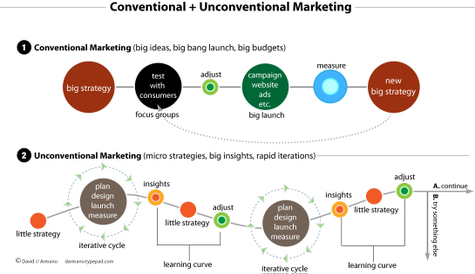 
As an individual, this blog is one of the most effective manifestations of "marketing" I could have produced for myself.  I have a respectable audience that comes back as opposed to visiting it once, never to return again.  People participate in through comments and the content is distributable.  But imagine if I started it the same way many large organizations launch conventional marketing initiatives. What would that have looked like?

First I would have had to do several hundred pages of strategy documentation, including target audiences, marketing segments, competitive analysis—you name it. Then I would put some concepts together and test them in focus groups to see if representatives in a lab like A, B, or C, better. Next, I would take that feedback, make a few adjustments and plan a multichannel campaign—launching the blog with all sorts of advertising pointing to it. And since I painstakingly outlined the ROI in the in-depth strategy, I'd go about measuring the effectiveness against the ROI that was outlined prior to launch.

Of course, this blog like millions or other forms of "social media" followed a path that looked nothing like that. In fact, it looked much more like the second flow.  Sure, I put some initial thought into it before ever touching a pixel, but once I launched the blog it became a never-ending cycle of content development, template design tweaks, and learning curves based off of what was going on each time I did something.

For example, when I started posting visuals, I would check my stats and could see that people from all sorts of other sites and blogs began referencing them and linking back—so I realized that the visuals were providing something people wanted, and if I wanted to continue to build an audience, this was a good way to do it.  Secondly, I had thought that my primary audience would be designers, when in fact the blog started attracting an eclectic audience of planners, marketers, librarians, even evangelists.  After each cycle of launching content or even functionality in the sidebars, I was learning about who my audience was and why they were coming.  This required me to periodically have more frequent checkpoints of "little strategy" where I would plan the direction of where I wanted to go and make the appropriate adjustments to get there. And it felt less like a straight path and more like a meandering one, because the "focus group" was happening in real time after the initial launch.

I've been thinking about this for a while because after having some exposure to large organizations, it occurred to me that there is a desire to do more "unconventional marketing" but the machine which is in place is actually "conventional"—all the things that have been done in the past. For example, it's common and understandable for the "what's the ROI?" question to be raised during an unconventional marketing initiative, but that question could derail the entire effort before it has a chance to ever get off the ground.  Sometimes the ROI is simply insights and learnings that are gleamed from actually doing the initiative. Other times, the direction of the initiative changes midway through in in unexpected ways that could not have been predicted. Many times for the better—let's not forget that Twitter was never meant to be what it ended up being today.

Speaking from personal experience, I could not have predicted many of the outcomes I have had since launching this blog, but I believe following a much more "unconventional" path is a core reason behind everything that I've learned from it.  For a couple of hundred dollars a year and a lot of dedication and effort it's priceless to me.  And so as I think about how times are becoming more unconventional—with unpredictable financial markets and political change in the air, I can't help but think that it's more important than ever to get serious about what it takes to do these types of initiatives right.  It just doesn't look like conventional marketing—it's different. And unconventional times call for unconventional tactics.