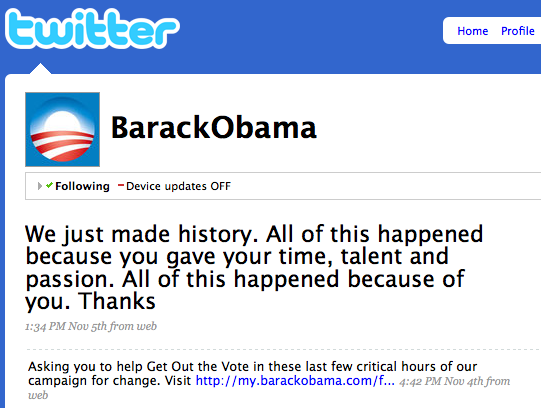 If you paid a visit to Barack Obama's Twitter page—you would see a moment frozen in time. The last message sent out was on November 5th, which on Twitter is a life time. It reads

Obama's Twitter profile has one of the most impressive number of followers you will see on the Social Network. Close to 160 thousand. While the office of president elect Obama continues to feed other media outlets such as video (here Obama gives a holiday greeting) it's unclear if the Twitter presence will continue to go on. I think it should. Here are 10 reasons:

1. Micro-Interactions
The Web has proven to be a fragmented medium and the Obama campaign did a steller job of coordinating a mass campaign with micro-interactions all over the internet. Twitter is small ecosystem that sparks large influence ripples. Sustaining a presence here can get people's attention very quickly.

2. Portabllity
Many Twitter subscribers receive updates via their mobile phones. While e-mail and video communications require sifting through noise to get to it, reaching people immediately in their pocket can be an effective way to communicate.

3. The Human Feed
As I talked about recently, Twitter acts as a sort of human powered filter. When people are engaged in it, they look to others to help make sense of information. Obama's account on Twitter could be used to direct people to relevant content, or in the event of dealing with the press—Obama (and/or his staff) can use it to directly tell their side of the story in real time.

4. Listening
It's likely that Obama's staff and the governent is monitoring conversations everywhere for a variety of reasons. Twitter becomes one more place to monitor and keeping the account active can help. While few people will expect Obama to "talk to them". It can be used to listen.

5. Lifestreaming
Team Obama must realize that they have an effective PR tool on their hand. For the first time in history, a president will have multiple lifestreams in place. Whether it's him or not, it's an opportunity to provide non sensitive information about Barack the man, not just the president. Presidents who come off as human—that we feel connected to tend to fare better.

6. Immediacy
As the Mumbai attacks have shown us, Twitter is a medium of immediacy. If there is a message of urgency that needs to go out quickly—Twitter can trigger a ripple effect and can even support links to sites with critical information. This could come in handy during a time of crisis.

7. Support
If you look at Obama's time line, it was mainly used as a campaign tactic to mobilize support—to let the people know where he would be and where they could join a rally. Twitter is an extremely effective tool for rallying people. Post election this could come in handy when legislation needs to get passed.

8. Convenience
It's just too covenient. Easier to update than a website, faster than a video and can be equally effective if done right.

9. Comittment
While the last Tweet in Obama's stream captured a memorable moment—it also sends the message that the communicaiton on Twitter was campaign based only (since it hasn't been updated since). Reviving the account and comitting to using it in an effective way would demonstrate a commitment to the near 160k followers and then some.

10. Change
Twitter's stream is liquid. It's an environment in constant flux—one that changes in an instant. This is a medium where it would make sense for a modern day presidet to have a presence in. It made sense during the campaign and it makes sense post campaign.

Realistically, I would never imagine that a president could sustain a presence here—but thinking about the number of followers that was amassed (and continue to grow), I just wonder if there's a missed opportunity here if the account stays dormant or doesn't evolve. What do you think?