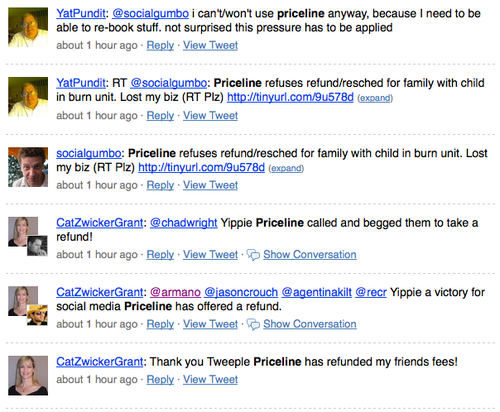 What you are looking at is a small sample of conversations that were happening on Twitter just hours ago. Cat Zwicker-Grant, who works in the Real Estate business also writes a blog. On her blog, she recently wrote on behalf of her friend who could not get a refund from Priceline. The circumstances though were understandable. Cat's friend had a baby who suffered from severe burns and could not travel. But Priceline wouldn't budge. Here's what happened next in Cat's own words.

"I opened Aaron’s email around 12:00PM PST I posted a Blog on Google describing the events and then sent a Tweet Blast around 2 if my tweets are logging PST, which is possible as I have no sense of time.  Then I specifically re-tweeted to people with larger follows to help make sure I was heard. Aaron called me at 4 PM PST which is 7 in North Carolina and said that,  “Priceline had called about an hour ago and offered to refund the money!”

Before you go crediting "social media" to this, know that Priceline had acknowledged several phonecalls from all different parts of the country. No doubt, this was tied to spark that Cat was just getting started on.  Cat has a modest following on Twitter, with 148 followers.  What's not modest about her is her smarts. She immediately started reaching out to people with significant influence and even MORE importantly, people who would take ACTION, like a simple phone call.

Priceline may have stopped a negative groundswell against them, before it ever had a chance. The retweets (twitter's own version of "viral") were already starting. The ripples were just being formed. Now what we don't know is if Priceline was listening—saw her blog post (with a moving image of the baby) or started to see the action happen on twitter but we do know that they made a decision that humanized the company.  It's quite possible that Priceline saved themselves from a social media headache before most of us even knew abvout it.  Whether it was because of the phone calls or tiny ripples forming, Priceline deserves credit for being a company that cares. Which isn't easy in this economy. Kudos to you Priceline!