The Art of the Re-Tweet 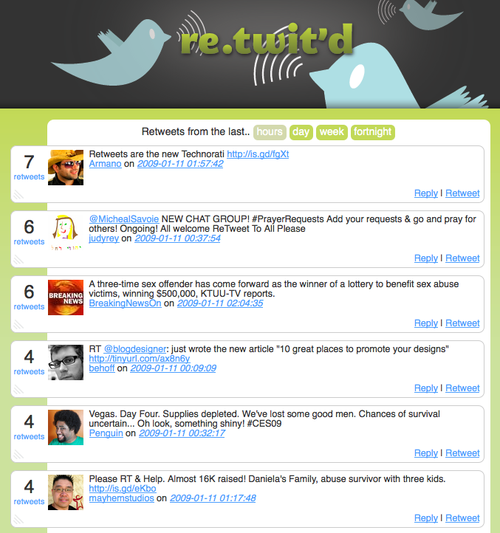 I can't think of a more talked about network right now than Twitter. I've gone into why that is in length, so I won't go into it in this post. The absolutely fascinating thing about Twitter is how it continues to evolve over time. One minute you think you've got it figured out and the next minute the network mutates into something else that requires you to adapt along with it.

People who initially found success on Twitter mastered the art of several disciplines. Writing, conversation, being interesting and being interested. In short having something to offer to the communities who frequent the amorphus network.

Enter the re-tweet. There are several web applications being developed such as re.tweeted which not only keep track of the most re-tweeted items (tweets that are most commonly repeated by others) but allows users to sort by hour, day and week. The service is brand new and will most likely evolve as well.

Who Cares About Re-tweets?
There are several reasons why re-tweets matter. Here are a few:

1. Retweets drive traffic to sites: When any of my tweets get re-tweeted more than 5 or 6 times, I see substantial increased traffic to my blog.

2. Retweets lead to new followers: I've also noticed that frequently retweeted items increase the amount of new followers I get. Chances are if you are active on Twitter, you may have noticed this as well.

3. Retweets Increase your visibility in the stream: Twitter is all about the here and now. It's perfectly designed for severe ADD Web behavior. The more you show up in multiple Twitter streams, the more top of mind you are to other Twitter users who are wading in the waters at that moment.

The Art of The Re-Tweet
At the risk of criticism from people who will say you shouldn't be on Twitter to get re-tweeted (you shouldn't) I'm going to provide a few tips despite that fact. Why? Simple. Because one thing about Twitter is that it's got a few similarities to e-mail. You write a good headline, provide some value and people are more likely to take a look, and actually look forward to more.  Here's a few tips for the art of the re-tweet.

Keept it short
Short Tweets are more likely to get re-tweeted if people do not have to edit them. The shorter the better because multiple "RT's" and names are added each time someone does it.

Keep it valuable
Provide value in the form of a good link, a good laugh, or a good thought. Inspirational tweets or flat out humorous ones spread like wildfire. And really solid links to valuable content do as well.

No, you should not be on Twitter to build up followers or seek re-tweet fame. But these things do help you build your network. As I've found out quite poignantly, building your network with care goes a long way. The art of the re-tweet can be one of many tools to do so.