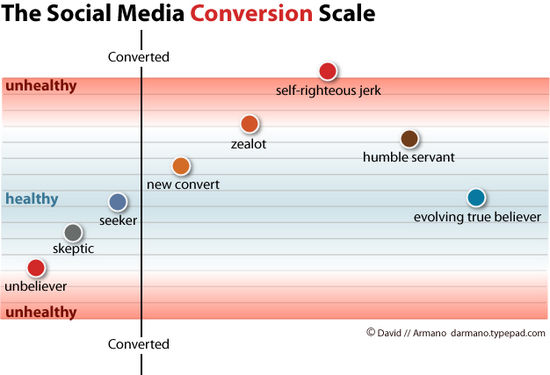 As we head into 2009, it's not only cliche to be it bit retrospective—but essential. I've always found that looking back is the best way to look forward. And looking forward is the best way to move forward. if you don't look where you are going, you'll likely stumble and hurt yourself when it could have been avoided.  There's no doubt that all the things which fall under the very big umbrella of the evolving Web have had a big impact on many of us this past year. 2009 will most likely continue to be a transformative year, mixed in with a lot if uncertainty. I thought it might make sense to think about the bright and shiny object that we are all transfixed on called "social media" and to really think about some of the stages we go through as we navigate our way through the space.

We're at a really interesting time here. Right now the new buzzword is "accountability".  It's a backlash due to so much of the hype that's been generated by all things Web 2.0.  But if we are really honest with ourselves, we've all most likely played one of the roles I'm about to expand on, and not just the honorable ones. That's because the Web is evolving into a more human form—and humans are seriously flawed beings. Food for thought as we all grow together on the conversion scale.

Un-believer
Be honest with yourself. We've all been unbelievers at some point in regards to something related to this space. For many it was Twitter—a platform that makes absolutey no sense at first glance. For others it's just the denial of the rate of change that's happening around us. Unbelief is unhealthy because it doesn't even allow for curiosity or exploration—it's just a stark position that doesn't see believe in the potential of what others are talking about.

Skeptic
Being skeptical is healthy—it means asking questions and poking around before moving forward. I remember being skeptical about the idea of putting a face to your online presence. I just wasn't sure about it. I presented counter arguments against why it made sense to do it, but I also listened to the opinions of others. Now I'm a believer in the power of personality.

Seeker
Seekers have yet to be "converted" over to social side of the fence, but they are open to trying things out, finding our what works and what doesn't and having conversations with those who are deeply embedded in the space.Seekers often end up finding the "evangelists" in this space taking in multiple POV's and learning by watching. This is one of the reasons evangelists have a good deal of responsibility and actually play a role—people in seeker mode may be influenced by them. This is one of the healthiest places to be and also shapes the conversion experience.

New Convert
Seekers become converts when they reach a point of "faith"—a belief in something bigger than themselves. I remember when first blogging and immersing myself in participatory media, feeling that I had "seen the light" Studying my own metrics and understanding how memes spread made me think about things like search engine optimization differently. I instantly saw the value of making your media portable and was blown away by how flat and deep the Web was beginning to look—anyone could share an idea and build credibility. It was a transformative experience. If you are an active participant in the evolving Web, many of you will relate.

Zealot
It's very natural to go full throttle when you believe in something with your being. This is where zeal comes from. And this is where things can get a little interesting and somewhat unhealthy. When becoming immersed so deeply in something, you begin to lose perspective on how things look from the outside—you become so intent on enlightening others that your zeal can actually turn them off creating un-belief. It's not all bad though and for many of us has been a natural phase of our growth.

Self-Righteous Jerk
This is the one catagory that I'm sure all of you will glance over and think to yourself "glad I skipped that phase". Well, I'll share a specific time I was a self righteous jerk. Several years ago there was a big to-do about Seth Godin not allowing comments on his blog. He turned them on momentarily, then turned them off. And here's what I said:

"I respect Seth's POV—but I don't think this is consistent with the marketing principles that he evangilizes.  So, I'm taking him off my blogroll.  For authenticity—please see Jaffe Juice."

What a jerk I was! I mean, what do I care if Seth allows comments or not. He's adding a lot of value to the space by openly sharing his thoughts on a daily basis and he makes the discourse interesting. But that's what being a self-righteous jerk is all about—it's not simply having an opinion, it's taking it to the next level—passing judgment on others and making yourself look better. So, I've been there done that, and guess what—the best thing about this phase is that it can rear it's ugly head at any time (actually they all can.)  I think It's time to add Seth's blog back to the site. Should have done that a long time ago.

Humble Servant
I chose to include the word "humble" in here because whe often times take on a servant-like attitude only after we've been humbled. In an economy like the one we are in, this is bound to happen to many of us—if it already hasn't. Fear not—this is a great place to be. When we realize that we're in this space to provide a service—to serve others somehow whether it be through trying to inspire, execute, lead, produce, coach, whatever. It's all about having an attitude of wanting to provide some type of service which makes things better. 2009 for many of us can be a year to offer a service that serves a purpose.  "Humble" is also a double edged sword by the way—too much focus on it alone can take you back to "self righteous jerk" :-)

Evolving True Believer
At this point, you look at the changes around you and see it with fresh new eyes. You believe in the power of "social media" and more importantly the evolution of our behavior enabled through technology. And you realize that your beliefs have to simply evolve with that behavior. Both the good and bad parts of it. Because the human web is both good and bad—but you still believe. And most importantly, you've learned along the way and realize that you're never going to stop learning.

The point of the "social media conversion scale" isn't to identity where you are right now, but to reflect on where you've been and where you want to go. Many of us have now been "converted" and this is where things get interesting. I've been a believer in the Web since deciding to work in the space full time. That was back in 1997. A lot has changed since then and much hasn't (people are still people). I'm looking toward 2009 with a hopeful attitude realizing there's a lot of uncertainty in the air. Hopefully I can evolve while still believing.

Here's to a year of evolving together.