Battle of the Brands

Earlier this year I gave a talk on something I believe is an emerging trend whether we like it or not. The idea of everyday people spending countless hours building and managing their reputations online. I made the comparison of this equity generating behavior to that of brand building. Ordinary people, having micro influence in this macro medium we call the internet.

Since I only had 20 minutes for the talk, I missed out on very important part of this phenomenon. The potential risks and downside of of this activity as it can relate to your full time profession—especially if you are not self employed. Take Scott Monty, who currently heads up social media initiatives at Ford. If you go to Scott's Twitter page, you'll immediately notice a dichotomy between Scott Monty, the individual and Ford the company he works for. Ford's logo is evident all over the page and even hovers over Scott's "avatar" which shows up in thousands of Twitter streams globally. Scott has over 12,000 followers on that social network alone. 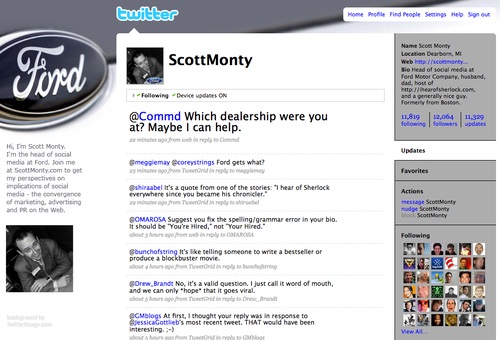 Scott was well known in the social media space prior to his employment at Ford (which probably helped him get the job) and uses his network to talk about work and personal related issues. The lines which separate the two are blurry. Recently, Scott's been receiving some criticism over how he handles this delicate balance between his brand and the brand he works for. To pull a recent quote from one of the blogs:

"... if Scott Monty wanted to show that he was really doing this for Ford, he'd open up a Ford Twitter account — an idea seconded by another social media site — to use daily for his work rather than his current ScottMonty twitter account. Because right now it seems like he's set up more for ScottMoCo promotion than for FoMoCo promotion."

This post is not meant to defend Scott, though I do know him and have spoken on several occasions, but I think there is something much bigger worth thinking about which goes well beyond the surface accusation that Scott is promoting himself at Ford's expense. And for the record, based what I've seen, I think Scott is being rather generous levering his personal network to help jump start Ford's initiatives (which includes several Ford Twitter accounts and outreach programs).

Powered By People
Here's the simple truth. If you are going to have your company play on the social Web, then you have to be ready to play a full contact sport which includes unpredictable scenarios. The latest evolution of the Web and the ways business tap into this are enabled by technology, but fueled by real live people. This means that hiring people like Scott means bringing his existing network into your organization and your organization into his network. On the flip side, individuals like Frank from Comcast, Lionel or Richard from Dell or Tony from Zappos have put their company first in their profiles thereby building equity through their jobs.

In either scenario there is still common ground. The social Web is personal, and dependent on people and when a person leaves your company, at the end of the day no matter if their persona had JohnatBrandX attached to them, the people they interacted with in all that time will remember the person behind the brand. That person takes their equity with them while leaving the infrastructure they have put in place at the company they worked for. If it sounds messy it's because it is and will be. It's powered by people and people are messy. People also tend to be more loyal to other people than they are to faceless organizations.

If your company, or you as in individual doesn't like this—don't even bother investing seriously in social initiatives, because they aren't automated, easy or quick solutions.

Blurring Lines
Some will say that separation of church and state is the way to go. Always lead with the brand. I'm not sure it's that simple. Take a look at Frank Eliason's (@comcastcares) personal blog. Frank talks about life, his family and yes—his work.  While @comcastcares on Twitter leads with the service that Frank and his team provides, Frank has swapped the company logo for a picture of himself. It's not always business on the social Web, often times it's personal, and this is what makes it work. In my humble opinion, while we can try to compartmentalize our "personal brands" with the brands we work for—the more we try to separate them, the less human it becomes. The social Web thrives on personality, mixing a "personal touch" with a professional service.  When Frank talks about life and business on his blog, it makes him not only a person, but an employee like many of us. And vice-versa on Twitter, which is why I assume he ditched the Comcast logo for a photo of himself instead.

At the end of the day, the social Web blurs the line between individuals and brands. It's not exactly clear what the rules of engagement are in these scenarios. But they will undoubtedly emerge as more companies put their people on the front lines of communication & interaction.

More Human Than Human
I've had some interesting conversations about this topic with people who have invested time developing and nurturing their own networks. Though they may not have the notoriety of a Monty, a Eliason, a Menchaca or a Hsieh, they may be unaware that they represent the organizations they work for more than they know. Using social networks on company time can help you do your job better or can be viewed as unproductive time. Either way, it brings up questions about how clear the line is between our work, our social networking and where they overlap.

And what about when social networking is your job? That's when we need to remember that at this point, it becomes about human contact regardless of who you work for.

The Road To Co-branding
Recently I talked about the idea of "brandividuals" (my hobby is making up words). For some, the idea is scary—the melding of our personalities with the companies and brands we work for. Call it whatever you want, I believe we'll see more of it—not less which means we'll need to figure out how the balance works. In it's simplest form, the phenomenon will look like "co-branding", two brands coming together toward a common goal. As someone who spends intimate time in this space (I am an full time employee for Critical Mass) the dance is delicate. It requires an understanding that the arrangement can be mutually beneficial along with a comfort level of the space. If your company is dipping it's toes in the the social Web, then you're going to attract employees who are active participants across multiple networks. Some, like Scott—may bring that network to your job.

There will be risks for both sides. But in the end, the switch from automated to manual means being powered by people. People with real faces, lives, families and potentially fans (not to mention critics).

Lastly, let's not forget to keep our eye on the prize. As Scott says himself in his video interview: