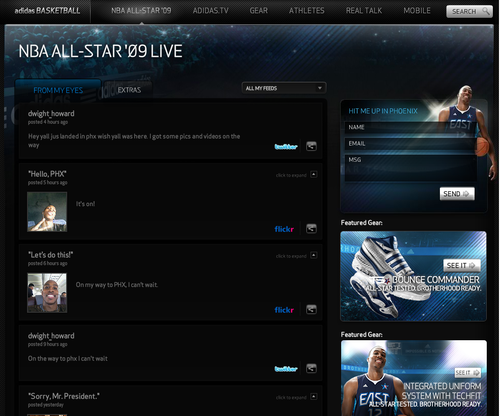 When we were pitching the adidas business as Riot a part of our vision was the ability to create content that could live anywhere tapping multiple networks as they are designed for the distribution of media. Another part of our strategy was creating spaces where that media could be aggregated. So as the NBA Allstar weekend approaches, it's great to see some of that vision coming to fruition.

If you are a fan of Dwight Howard, you should really check out this site we've designed specifically for the event. We'll be updating it with photos, videos and even Tweets from Dwight himself. Media will be uploaded to destinations such as Flickr and YouTube and the site simply sucks it all into one place and allows you to see it at a glance while giving you the option to go directly to the source on their respective networks. And yes, the page even scrolls. A sight for sore eyes. 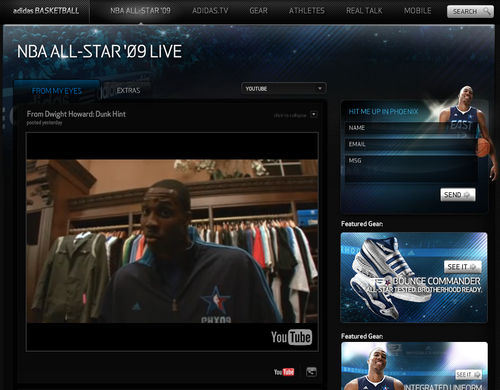 There's also a more standard You Tube page with a variety of videos of Dwight if you're just interested in the videos. Also, if you text "allstar" to 234327 you'll get a message from Dwight letting you know what he's up to over the weekend. Though I don't typically watch Basketball, I'll be following along over the weekend as well and tagging tweets with #allstar09 (feel free to do the same if you plan on watching).

And it's nice to see the microsite gradually evolve into something less contained.