How To Be More Human 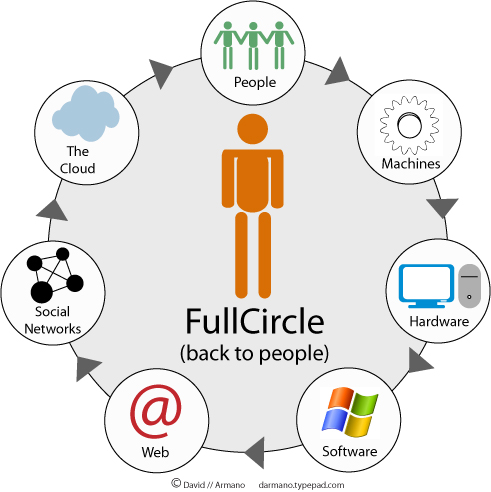 This morning a couple of things came together for me. The first, was that I unfollowed a company/individual on Twitter because the volume they were producing felt automated and not human even if there were college interns manually updating it (or maybe just a script). It just didn't feel right. The second was reviewing a deck where it talked about the need for "being human" on the social web. But it didn't get into how exactly, and that's where my gears started turning. Right now the biggest challenge to being successful on the social web is through high quality micro-interactions with high quality human beings. But organizations will find this difficult to embrace. The industrial revolution has taught us to mass produce and move away from human dependency. ATM's have replaced the need for that local bank teller in most places and call centers are known as cost centers, so companies face a bit of a problem here. But if they can figure out a way to make the numbers work, organizations who put a human face to themselves stand to become the industry leaders in a space that's still in it's early phases. Here's a few ways to be "more human".

Don't Automate
Automated interactions are done by machines and people know it. Right now, we're flocking to the social web because we can get a personal touch that cannot be gotten elsewhere. While the "masses" deal with terrible automated phone services etc, we feel privileged to be able to interact with the real people behind an organization. This presents scaling issues to the organization, but the the average customer we just like it and will come back for more.

Don't Strive For Perfection
People aren't perfect, and that's expected in the social web. In fact, the more perfectly something is written, produced, or executed—the more suspicious it becomes. Communication and interactions on the social web should be similar to those in real life. Imperfect, messy, spontaneous, and occasionally personal. Zappos understands this well. After a conversation with one of their representatives from their call center, we received a handwritten note that referenced something personal that was discussed during the call. You don't get more human than that.

Talk Back
In a scene from "I Am Legend" Will Smith talks to a mannequin to try to emulate human contact. Of course this falls short and it's exactly the same dynamic that exists on the Web when organizations refuse to talk back to the people who they want to talk to. The substitute doesn't work and all that's left is something that looks alive from a distant, but really isn't.

Talk Like A Human
People can spot robots, artificial intelligence and a fake a mile away. Talking like your legal team, your PR agency or a computer will get you unfollowed, unfriended or ignored. If we wanted to hear from machines, robots or legal eagles, we'd watch more advertising or interact with your organizations mainstream touch points.  We're on the social web because we want to connect with other human beings and we want them to act like them. Being human means talking like a human. Conversational style trumps dictation because human beings only dictate when we're in very specific situations. If people walked around all day dictating as opposed to being engaged in human conversations, it would come across as very odd. Interestingly enough, many organizations don't have people who know how to communicate like this. In the coming years, you may have to find some.

Avoid Artificial Additives & Preservatives
Until someone invents the perfect android, there's not much that's artificial about being a human being—we make mistakes, are fragile and the good ones know when to say "sorry" and try harder. Anything else comes across as artificial and less than human. Being more human on the social web means doing all of these things because it's likely that you'll make mistakes and that's part of the process. It's OK, because you'll be interacting with other humans who also make them. An artificial presence is unlikely to succeed because it will feel too much like the way your organization presents itself traditionally, and again—that;s not why your customers are engaging on networks. They want a more human approach.

So these a few thoughts on how to be more human. What are your own? What would you add? I'd love to know.