« The Micro-Sociology of Networks | Main | Make A Difference. NOW. » 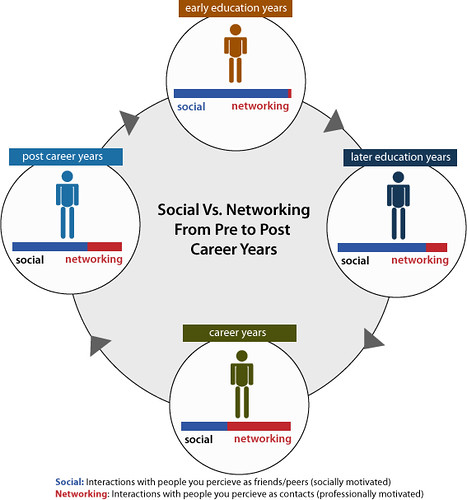 A funny thing happened on the way back from my guest lecture at Parson's Design At The Edge class. While the students (approximately 80 of them) were busy Facebooking their lives away—they could not fathom the idea of leading a public life or using social networks like Facebook for anything but pure social activity. Other networks such as Skype were preferred for even more intimate interactions. Practically no one in the class could even grasp why anyone would want to share uptates to large groups of people (some who would not be considered freinds or peers) through services like Twitter. It was an fascinating dynamic.

Interestingly, some of the senior students (the ones ready to start careers) didn't see as much of a divide as did the Teacher's assistants. All were curious about these emerging dynamics. Bruce Nussbaum of BusinessWeek and the professor had this to say in a recent writeup:

"Most of the students were sophomores and juniors and used Facebook as a private network among friends. The seniors, however, were beginning to use Facebook as a network to get jobs. There was a sharp Age Break or Life Cycle Break within the Gen Y class. Younger students faced inward in their use of Facebook, toward their friends. Seniors faced outward, networking with people outside their circle of friends. Facebook has both a social and professional function, and at least two micro-cultures. Three micro-cultures really. Aging boomers are using Facebook socially to contact old friends, including old boyfriends and old girlfriends."

Now it came as no surprise to me that the students would not be using networks like Twitter. The stats back that up and I kind of get why the appeal isn't there. But I started to think about this a bit differently as Bruce and I discussed the behaviors a bit more. I began to wonder if there is a bit of a divide between the ideas of "social" and "networking" and do the two priorities shift at different times in our lives. Of course the two overlap—but bear with me as I think this through.

Early Education Years
The current generation of children is being exposed to a new form of entertainment that combines being playful with a social element. Enter Club Penguin Wii, etc. Our children will learn how to be social digitally in ways we never knew. But there is no need to "network" with contacts as I'm defining it here—they don't exist. There may however be some type of "pen pal" activity though I'm guessing this would also be social in nature.

Early Education Years
In our later education years, highschool to college—social networks are ubiquitous and as the class validates prmarily used to manage relationships with friends, family, peers, classmates, etc. in 5 years or less it's possible that this won't be Facebook, but for now—this is where the action happens. As students begin to come closer to the working world, they see opportunities for "networking"—looking outside their immediate social circles for contacts who they can learn from, get connected into industries etc. Here the lines begin to blur more.

Career Years
Here's where I can speak from experience. Many of us are using networks not only to stay in touch with families, but also to "network" ourselves. The line is very blurry here, but the shift from being "inward" as Bruce points out to becoming more "outward" in our connections begins to take place. Many readers here will relate to this, but you have to understand that the premise to students is foreign. I just read today a comment from a student wh said they could never imagine meeting and making friends online that turn into meaningful relationships yet at this stage—many of us see happen. The balance here betwen "social and networking" drivers is nearly equally strong.

Post Career Years
I'll define this loosly as years where your career is not the priority it once was (or is different in focus), and so the shift and need for more social interactions that feel more like genuine friendships vs. casual contacts begins to increase once again. Talking with Bruce who is a veteran in his own career provided some interesting insights into this.

Now I fully understand that pulling apart the "social" from the "networking" is not how many networks operate—but, after digging into this a bit with folks representing all different stages, including myself—I thought this would make for an interesting way to frame the topic. I suppose you can look at this a number of different ways—but if we are honest with ourselves, we'll recognize that our stage of life dictates how we interact with this thing called the "social web". As always, I value your thoughts and opinions.