Turning The Tide: An Insider's Perspective 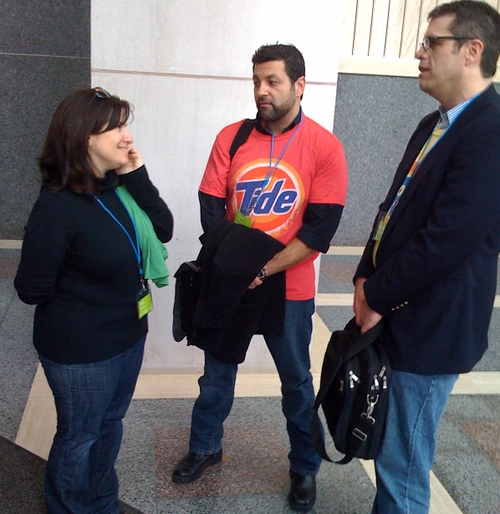 From left to right: Deb Schultz, Me, Kevin Dugan

The e-mail that hit my inbox several weeks ago said "you are invited to attend a digital hack night at P&G". It didn't say much more than this, other than to clarify that all the participants in the e-mail were not to talk about the invitation and had to keep it quiet. The list on the e-mail was impressive. Folks from companies such as My Space, Facebook, Google, combined with numerous agencies and even analyst firms such as Forrester. Full Disclaimer, P&G is a Critical Mass client (the agency I work for).

Weeks went by with updates on logistics. Then before you know it, I was flying into Cincinnati. My hunch was that P&G was going to conduct some time of exercise where we might ideate and build out new digital marketing ideas—we'd be able to publicly leverage our networks in the process. I was right on the latter point but not on the first. In reality, we were called in to raise as much money as we could for a disaster relief charity (view video). We were divided up in teams, told to compete with each other and went to work. And we worked it hard.

Ad Age has the official story, so I'd like to provide you with some insights you might not get from mainstream coverage. Here's a few highlights.

No time to overthink
As the doors opened to our War room, the firs thing I did was crack open the laptop and continue prepping my network while I sized up the challenge. P&G employees were embedded with every team and watching everything we did. I first summized that there was not enough information on the page where we were asking for people to buy shirts and so I quickly started writing a blog post with the information of who the charity was, where you could buy the shirts along with some popular Q&As. The post was done in less than 20 minutes to the surprise of some of the P&Gers and I didn't use the media they provided because the files needed reformatting. A big lesson learned was the power of speed in this space. 4 hours is not a lot of time.

Making people feel "there"
In addition to a blog post and using Twitter to get others to spread the word as well as point them to purchase, many of us were taking pictures or live streaming the event so people knew what was going on andn that it was for real and that there were real peopple behind it. Again, P&Gers were able to witness and learn from this activity. We were uploading more media in 4 hours than most brands do in a week. 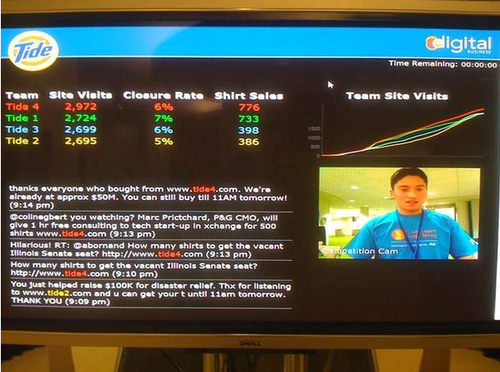 Driving traffic and revenue
I was on the red team which was the team that ended up in 1st place at the end of 4 hours (go Red!). I was told that the biggest traffic drivers were a placement on the homapage of My Space and the blog post I had written, As of last night, the blog post had resulted in the most traffic and purchases within the 4 hours. You can bet that P&G will be thinking about this in the future. Normally, interactive marketers rely on banners to drive draffic and hopefully sales. Above is the dashboard we used to monitor both conversations as well as traffic and T-shirt sales. It helped fuel the competition between teams.

At the end of the four hours it was announced that all teams had raised approx 50k for the charity and P&G matched that with 50k. I don't have the most recent numbers but purchases are going until 11:00 EST today. While I'm sure the effort will be criticized as everything including usage of social media tends to get—you can be be sure that big companies such as P&G are tired of sitting on the sidelines and doing nothing, they are going to learn by trying. In my book, that's a win and perhaps the tide really is turning.