« Highlights From Marketing 2.0, Paris | Main | And Now For Something Completely Different »

Marketing In A Post-Consumer Era 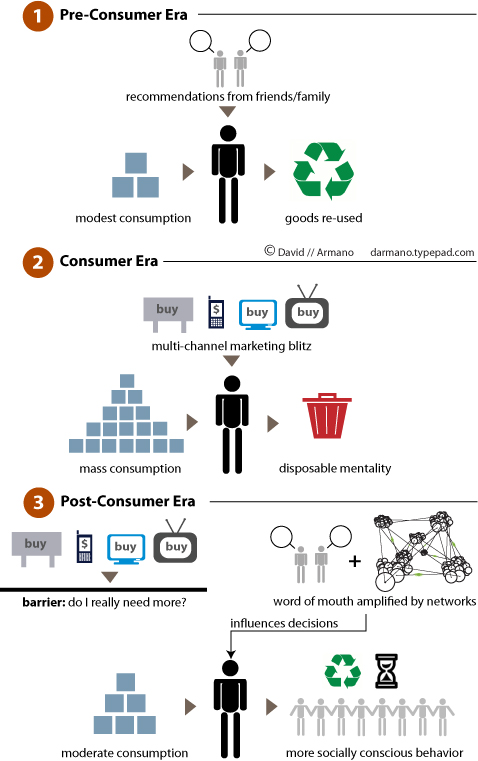 This write-up has been a long time coming and recent article in The Economist finally motivated me to kicking it out. But before I get into referencing that article, let me tell you about my dad. Several months ago I took a family vacation to Florida and got to talking to my dad about the economy. He agreed that it was in really bad shape. But then I got to thinking about how differently my dad's spending habits were from most people. My dad lived nearly his entire life in a "pre-consumer" mindset. Skeptical to marketing and advertising campaigns, he usually bought what he needed not what he wanted and held on to things to what seemed like forever. In fact, he only recently bought a flat screen television after nearly 30 YEARS of having the same TV play in the family room I grew up in. The house I grew up in has been paid off for just as many years because he didn't believe in debt and I watched as my parents held on to cars like they were family members, not putting them to rest until their time had come. This is how my parents lived.

Mass Consumption
Many of use live very differently than this. Credit lines have ensured that we can purchase beyond our means and advertising has had years to perfect it's craft making us believe that we don't want the latest and greatest product—but that we actually NEED it. In fact, if we can't have it our lives will be empty—we will be missing out we won't be living life as it was meant to be lived.

This of course is a lie.

But it's worked for years. Bigger, better, faster, newer. Get it and get it now before your neighbor does. It's a myth that's stood the test of time and fueled a global economy because it could. When it's old, throw it out or give it away. Then one day, the housing market collapsed, the stock market collapsed and we woke up scratching our heads as to why. And some of us are re-thinking the economics of mass consumption. From The Economist:

"The trend towards thrift will not disappear when the economy picks up. For one thing, those banks left standing after the bust will be far more parsimonious with consumer credit. For another, many people will still be intent on rebuilding their nest-eggs, which is reflected in sharply rising rates of saving. Sociologists also detect a distinct change in people’s behaviour. Until the downturn, folk had come to assume that “affluence” was the norm, even if they had to go deeply into debt to pay for gadgets and baubles. Now many people no longer seem consumed by the desire to consume; instead, they are planning to live within their means, and there has been a backlash against bling." 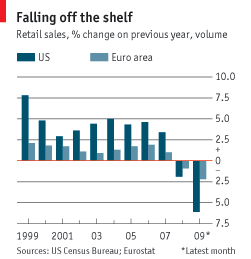 Marketing In An Era of Post-Consumerism
If the "backlash against bling" is real, then we really have to ask ourselves, what on earth is marketing going to look like to millions of people who don't want to buy like they used to—who are marketing weary? People just like my dad, only more digitally savvy. Not only that, but beyond marketing, what's the effect on companies who make their profits by continually producing new products? Bigger, better faster—guaranteed to make your life meaningful. Business and brands have a problem.

On the business side, corporations are going to have to figure out how to incorporate more services as part of their core offerings. Think about this, while new auto sales have taken a nose dive—repair shops have been profiting due to consumers opting to keep their cars longer vs. upgrading. What if Detroit could figure out a way to benefit from this? How about new car dealers? Most of them aren't known for the level of service they offer at the dealerships. The exceptions often get great word of mouth.

On the marketing front, there needs to be some recalibration. The holy grail of measuring a marketing initiative is being able to prove that more products have sold. But what if no one's buying? What if no one's listening for that matter? Do you stop marketing? Of course not. Marketing just needs to be more meaningful and relevant to a "consumer" who is looking for more relevance and meaning in their lives. They'll repay you with loyalty and positive word of mouth if you can offer them this—but here lies the rub.

Marketing Was Designed To Take, Not Give
Marketers are faced with a design problem. Marketing was invented to take, not give. It's meant to generate awareness and sell products not provide value. There's nothing wrong with selling products and the best marketing does this well. But bear with me—if the sociologists mentioned in The Economist are correct, than marketing may have to change it's stripes in order to be relevant to a consumer who is highly empowered, connected and asking themselves "do I really need more"? As far as I can tell, the most successful social initiatives look less like marketing and more like some type of service or value add. From Comcast providing customer service on Twitter, to Whole Foods engaging customers on Facebook to Hope Depot providing information during natural disasters, to Lego enlisting enthusiasts to help them develop products—"marketing" as we know it could already be evolving into something that it was not originally designed to be. Which would be a good thing becase as The Economist reports, the current economic climate may help fuel it's evolution:

"The downturn will also accelerate the use of social media, such as blogs and social-networking sites, by consumers looking for intelligence on firms and their products. As trust in brands is eroded, people will place more value on recommendations from friends. Social media make it harder for brands to pull the wool over consumers’ eyes, but they also offer canny companies a powerful new channel through which to promote their wares and test new products and pricing strategies."

Recommendations From Trusted Sources
As my diagram illustrates, marketing can not longer be a 360 degree "blitz" that assaults consumers with reasons to buy. The future of business will be simple. Providing better products, better experiences and providing indisputable value through things like services will get the right people saying the right things about you. This means there's going to be a Dawrinism effect at play here. Inferior brands, services and marketing strategies are going to fall on deaf ears and wither away while superior brands with more relevant and meaningful ways of connecting with their customers will prevail. We must remember that the social web DOES NOT create recommendations (or criticisms), it only amplifies them and accelerates the speed at which they spread.

These are a few thoughts I've had running around in my mind about what business might look like in a post-consumer era, and I'm fairly certain that we're already seeing the face of marketing gradually change in real time. As the Economist article suggests, I feel like the shift in consumer behavior may be more long term vs. a temporary blip, People really do seem to be re-thinking there lifestyles and asking themselves "do I really need more?". If that's the case, the way business works will need to adapt along with the new attitudes. What do you think?