« After The Jump | Main | Word Of Mouth Visualized: The Winning Entry »

Will Twitter See An "Oprah Effect", Or Is Influence Overrated? 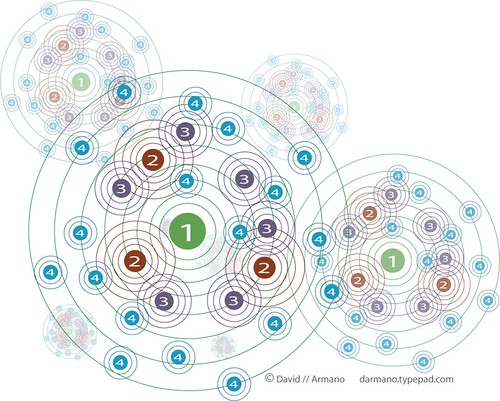 Related: Oprah responsible for over a million new Twitter users?
Oprah Winfrey has not only joined Twitter, but is actively using the service. She began using the service on her show and since her first communication her amount of followers went from 54,864 at  9:30pm CST. to 215,961 followers (in a 24 hour period). The NY Times reports:

"The popularity of Twitter, which allows users to broadcast messages of 140 characters or less, has been soaring in recent months. In March, the service had more than 14 million unique visitors, compared to eight million visitors in February. Ms. Winfrey’s endorsement is only likely to draw more attention to the San Francisco start-up and propel it beyond its niche audience.“Twitter has officially hit the mainstream,” said Megan Calhoun, founder of TwitterMoms, a social networking community for Web-savvy mothers. “People who have never even heard of it will be really intrigued and join. A whole new demographic will be introduced to Twitter.”

I'm hoping to keep an eye on what I'm referring to as the "Oprah Effect" and waiting for some numbers to come out to see what, if any influence Oprah has on the service and some of the dynamics that surround it (such as re-tweets, trending topics etc.) But for now, what I'm interested in is influence itself. If you look at the influence ripples diagram I did years ago, you'll see that there are all different levels of influence in any ecosystem. For example, Twitter itself started with a fairly small number of #4's and fewer #3's and #2's. Twitter has spread almost entirely from word of mouth, leading to press coverage but it's only been recently that we've seen true #1's (the Oprahs of the word) begin to adopt the service furthering it's exposure.

This is when influence could potentially create a perfect storm. Great numbers of "lower level" influencers can of course create a movement, and when combined with even just a few "higher level" influencers who have access to communication platforms—a critical mass of awareness and influence can be reached. This is where Twitter finds itself at the moment. It has millions of "everyday people" who love it and evangelize on behalf of the service. It also has thousands of highly connected people doing the same. And it's now entering a phase where hundreds of incredibly visible and internationally known personalities are joining the ranks.

While only time will tell if this perfect storm further accelerates Twitter's already rapid growth, there are some other interesting clues to chew on as we think about how people like Oprah will affect Twitter's ecosystem. For example, Evan Williams who founded Twitter saw an increase in his own influence by 18% since Oprah's show where she featured the service (see below) 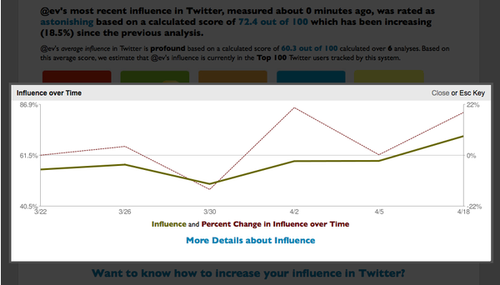 I asked a few of my own Twitter followers if they thought their could be an "Oprah Effect" and created #opraheffect to see what they had to say: 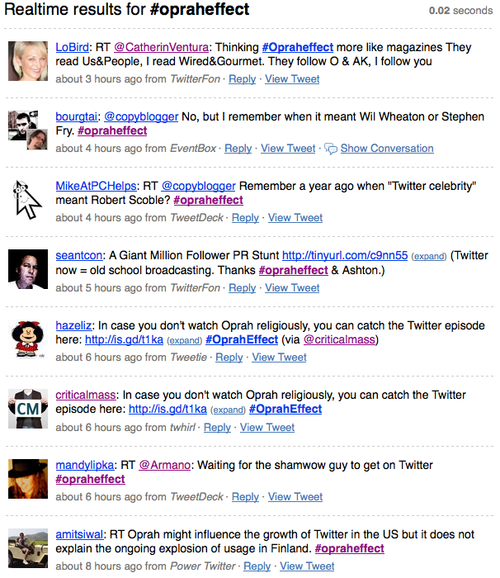 While the responses are varied and there's no shortage of opinions, I'm curious to see if this latest burst of awareness with individuals such as Oprah Winfrey (@oprah) and Ashton Kutcher (@aplusk) has on the size and influence of the network itself. Ashton who now has well over one million followers thanks to a highly publized competition with CNN is currently the most followed individual on the network. It's worth pointing out that at the end of the day, it's not just about someone like Oprah jumping on, but how they use the service. If Oprah chose to "tweet" from her show, live—on a daily basis you could be sure that her fans would jump on the bandwagon one at a time. If she doesn't do anything from this point out, the "oprah effect" if there was one diminishes over time.

So does any of this matter? Well, maybe not on a personal level unless the service is impared as a result. And lots of people don't like the fact that Twitter is being used as a broadcast tool (it can be used to both broadcast and engage). But from a business and relevance perspective, it does matter. As Twitter continues it's rapid growth, it ventures further away from an obscure internet service to something that could potentially enjoy Facebook like numbers. In short, a perfect storm of all levels of influencers matters, because like Facebook—if all your friends are on it, you'll want to be on it too.