Is It Who You Know or What They Know? 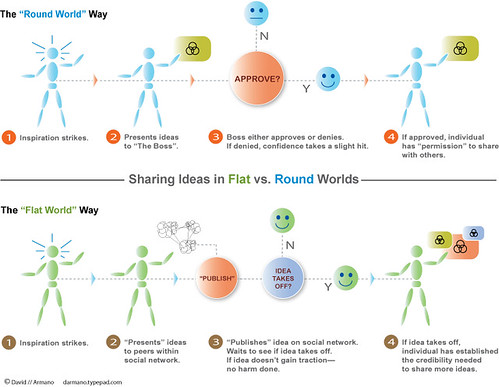 Update:
Aaron Brazell at Technosailor wrote a response shortly after this post. It occurred to me that writing this in a nuanced fashion, has possibly dilluted my intent. I personally feel that "networking" has taken priority over substance and that the balance needs to be restored. So in short, "who you know" has become more important that "what you know" and this isn't necessarily a good thing. Hopefully, this clarifies my intent.

When I first started this blog in February of 2006, I immediately sensed that things had changed forever. More specifically, as my early diagram shows, knowledge was being set free. Anyone could have a voice—participate and offer value. On the social web, value exchange is everything, you bring something of value to the table and everyone benefits—including yourself. In short, the social web empowers all of us to be amplified versions of ourselves. We can bypass the gatekeepers who once held control over who got to have a say, and who didn't.

If you look really closely at the small pond of folks who make their living in "social media" or "web 2.0" related practices, you'll notice something. You'll need the endorsement of a Guy Kawasaki, Seth Godin or Tim O'Reilly to be taken very seriously. The events that pop up are frequented by most of the same people—all of who know each other, many who are friends. One person sponsors an event, invites friends to speak—and those friends return the favor. And of course when it comes to events, anyone can buy their way in. You just have to be a sponsor. None of this is bad, it's kind of how it's always been.

But is it really about what you know, or who you know?

I suspect that it's both actually, though at this moment in time—who you know is more important than ever. Since the web has gone social, it makes sense as advancements in technology have allowed us to put a face to people, and relate to them in a more human way. And that's actually how it's always been. Relationships led to sales, closed deals—we bought stuff from the people we trusted. In some ways, what's old is new again.

But I hope, it's not just about who you know.

Because there's something to be said for those out there, who perhaps aren't as adept at "networking"—but have a lot of insight to offer. They might not be uber visable, they might not have written book. They might not have have been responsible for the latest corporate case study. They may not even be founders of the next Twitter. But they could have something to offer. In that case, it's up to all of us to find them. Perhaps take a look at something like the Power 150 and start the list backwards (or maybe get out of the marketing echo chamber all together).  If you yourself have become the new breed of "gatekeeper"—ask yourself "is it who I know, or what they know?". Ideally, its both—but up to us individually to strike the right balance.