Is The Hub And Spoke Model Adaptable?

We've been doing a bit of thinking on how organizations can re-design themselves as social systems which produce emergent outcomes—that is, results which move business forward and tend to emerge in an organic fashion. Twitter's growth due to end user innovation, an open API, and other drivers are an example of this. When I first wrote about Twitter in Businessweek back in 2007—I called it an "ecosystem"—that's because it is. It's a living, breathing organization with thousands of nodes in place which facilitate real time dynamic signals. In my new role, I was recently able to take a high level look at an organization and how they wanted to evolve their communications system. Essentially they had a "hub and spoke model" in place—but it was based on one way vs. two way communications. The next phase, included transforming this in to a more dynamic two way model. Which makes sense. But, I'd like to make the case that a hub and spoke alone—does not make for a connected ecosystem.

The Limitations Of Hub And Spoke
Jeremiah Owyang recently published a Forrester report which advocates a "hub and spoke" model for organizations who are serious about adopting social technologies. When compared to his other models (tire, and tower) it's definitely a step forward. Jeremiah describes the model as such:

"We believe the most sophisticated and efficient way is the Hub and Spoke, which provides centralized resources that can support business units.  The business units still have the freedom and flexibility to dialog with the market –and should be in alignment with what other spokes are doing.  Social doesn’t impact one department –but impacts marketing, pr, product, services, support, and development –every customer touchpoint."

So when comparing what Jeremiah proposes to the other models—I'd agree that it's the next iteration. But, I'd also ask if the hub and spoke model, even with cross disciplinary teams at the core could potentially create a bottleneck where signals no longer become dynamic and prohibits the creation of a network effect—built off multiple nodes both animate and inanimate. Consider the case study on American Airline's Web design failure as captured by Fast Company and Core 77: 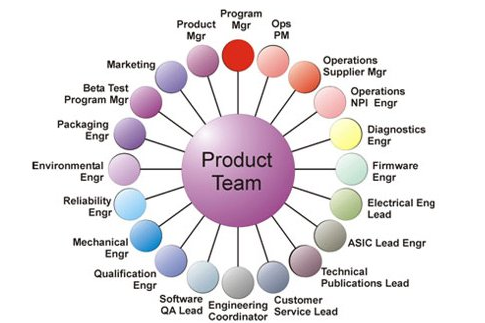 "The biggest challenge to better design isn't getting better designers. The problem is organizational, and the hub-and-spoke decision-making process that was originally created to slash bureaucracy--that is, to create more decentralized decisions and less hierarchy. But the overriding weakness, which design thinking makes manifest, is that good design is necessarily the product of a heavily centralized structure. Great design at places such as Apple isn't about "empowering decision makers" or whatever that lame B-school buzzword is. It's about awarding massive power and self-determination to those with the most cohesive vision--that is, the designers. Those are the people with the best idea of what customers want. That's the essence of "design thinking." If you were to summarize just how ugly--and self-defeating--the alternative can be, AA's Web site would be a smoking gun."

Both Core 77 and Fast Company articles are worth reading as they highlight the issues many large organizations face when designing products and services—and the issues underscore why there are so few examples of truly great products and services that we celebrate. At the core, effective organizations have effective cultures and effective cultures which often display a collective "hivemindedness" begin with a healthy and connected ecosystem in place.

An Adaptive Organization
While the hub and spoke model isn't necessarily the wrong model—it's worth asking if there are better models that can lead to an adaptive organization. At the Enterprise 2.0 conference in Boston, I had a brief but excellent discussion with Deb Lavoy who works at Open Text and is thinking about issues such as collaboration and emergence within organizations. For some reason we both ended up talking about the U.S. military and how it's had to adapt it's own methods to deal with an enemy who operates more like a network with cells and a decentralized structure vs. a top down command and control model. While neither of us have the details, we both made the reasonable assumption that the U.S. military must be adapting their model very quickly to deal with new threats like this as they've shown progress. What's even more amazing is here's a huge organization that has traditional power structures and hierarchies in place which is unlikely to change. And while I'm not in the military, I've been told that the single most important skill to a soldier on the battlefield is their ability to adapt to current conditions.

The backstory behind the above visual was that I wanted to visualize what it might look like if you took a single "hub and spoke" model and turned it into something that resembled more of a network. Essentially, hubs and spokes still exist, but multiple nodes are introduced which are connected to other nodes as well as hubs and even individual constituents. Constituents can be any participant in your ecosystem—the iteration means that they can be directly linked to a hub, but also connected to other parts of the ecosystem including other constituents who may be organized in different departments of the organization. Here is where a collective begins to form. At a micro-level, departments, customer segments, and local area networks remain.  At a macro-level, the network can be mapped to illustrate how the business functions as part of a system comprised of dozens, hundreds, or even thousands of smaller ecosystems. Constituants can signal dynamically to each other or plug into a different node being exposed to many areas of the entire ecosystem. Communication becomes instant and real time as it often is in many networks (think status updates, streams etc—all forms of dynamic signals).

Yes, this is high level thinking. Yes, it's still the beginning—but we think the opportunities exist. In it's simplest form you have to ask yourself this question: If you are going outside the walls of your organization's ecosystem(s), sharing knowledge providing value and yes even innovating out in the open, then why are you (or your peers) still hoarding knowledge, emailing and working in silos within the walls of your organization? These are some the questions that social business design can begin to address, if we start the conversations at the right levels.