Should Your Social Media Lead Eat Their Own Dogfood?


In the past few months I've noticed a trend. Organizations of all shapes and sizes are appointing people into "social media" positions. From VP's of Social Media, to Social Media editors, etc. It's indicative of the fact that businesses are taking the space very seriously and making investments to grow capabilities.  But if you dig a little, you'll often times find that some (not all) of the people placed in these positions have very small "footprints" in the space. A recently created Twitter profile with a very short history, a presence on Facebook that looks like an unfurnished apartment, no blog to speak of. You get the point. And it's got me thinking. Should the people who lead the charge within your organization be active participants in the medium? Does it really matter?

Recently I spoke at and attended the Conversational Media Summit in NYC. It was an excellent event. And I noticed something very interesting on Day 2. Marcy Schinder, who did a very nice job presenting a case study for the AMEX Open Forum initiative began to individually engage people on Twitter who mentioned her. Then she went further and followed up with people she had met in person, with a short note through the service. Very personal, very effective—a great example of micro-interactions. 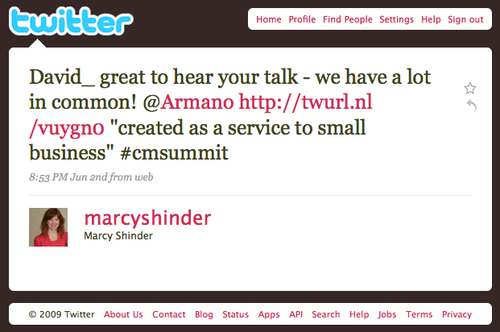 But why did I take notice? Because I look for signs of credibility with any representative doing work in the space. Often times the first thing I'll do is Google their name to see what they've done. Marcy shortcircuted all of that, her direct engagement with people using social technology told me more about herself than even a Google result would have produced. Within seconds, I made a snap judgement of credibility.

I'll put a stake in the ground on where I fall on this issue. It's not critical to be a fully engaged active participant before you accept the responsobilities of leading social initiatives, but once you begin, you'd better show an intimate grasp of the space. Because, we're all out there—Googling, Digging, looking for signs that you know what you're talking about. Take a page out of Marcy's book if you are in one of these roles. Engage people in relevant, meaningful ways and add a few notches of credibility to your belt. If you've got an opinion on this, participate in the poll above and/or leave a comment. Would love to hear your thoughts.