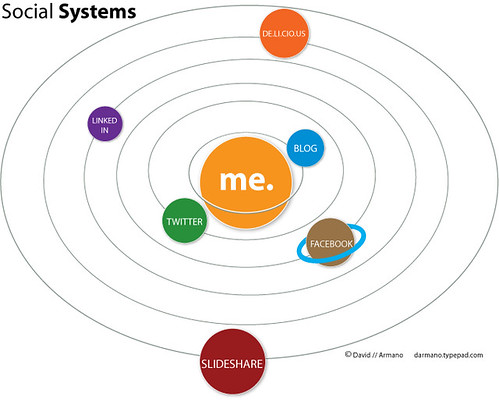 You may or may not have heard that Best Buy, when recently announcing they were hiring a director of emerging media listed a requirement that qualified applicants have a minimum of 250 + followers on Twitter. This launched a flurry of debate specific to this one issue, but the bigger issue as we've discussed here before is that organizations are increasingly looking for individuals who can not only fit into their corporate culture—but also poses a DEEP knowledge in all things related to social business. And let's face it, organizations are faced with a huge challenge here because there are probably millions of candidates who proclaim they are experts, thousands which actually know what they are doing, and only hundreds globally which both know what they are doing AND can actually plug into your corporate ecosystem without breaking it. So assuming that you think you've found someone who "fits" from a cultural perspective. here are some things you might want to consider when trying to gauge a candidate's "social street cred". Of course keep in mind that every employer has different goals and priorities, so your goals and needs should be prioritized and customized for each individual you consider.

Social System Management
A great place to start when evaluating an individual's own use of "social media" is to take a step back and evaluate their entire system. If the individual has a presence on Friendfeed, this is a good place to start as it aggregates most of the popular networks that can be linked to that person. Blogs and or websites are another place that you can locate a candidate's streams in aggregate. The first thing you are looking for is experience with multiple ecosystems—unless the job description only requires a savant like deep dive in one—but I don't know why any employer would want that. The next thing you should do is spend a little time analyzing HOW the person uses the various networks that compose their entire social system. Is if for promotion, work, play, etc. Also, how consistent are the threads? Do they come off the same in each network? Are they effective in each? It's likely that your candidate will really be excelling in a handful vs. many, but talking a look at the entire system and how their social touch points intersect can provide a more complete picture.

Social Communications
It's been said that blogging has been replaced by microblogging—but guess what, if a primary requirement for your position is that the candidate needs to know how to write, then reviewing their tweets will be useless. Put some thought into the primary ways your candidates will be communicating both internally and externally. Blogs are great for evaluating writing skills—and looking over things like comments or re-tweets may give you an idea if the candidate's writings are getting traction in the community. If you forsee your candidate being a spokesperson on video, see what they've either produced themselves in that area or you to video sharing sites such as You Tube and search for their name. If it's rapid response in 140 characters than of course it's Twitter. The bottom line is to think about how your candidate will need to be communicating and seek out the relevant proof.

Date Of Participation
Like the Best Buy example shows, organizations are grappling with how they should qualify candidates. Should you have a minimum number of followers on Twitter? The sad truth is that nearly every social network can be gamed—so numbers of friends, followers tell you nothing about quality. There are scores of services on Twitter that will guarantee you 5k followers in a week for the right money. In fact, if someone started on Twitter and in one week gained 5k followers, it could actually be a red flag. A simple litmus test is to look at when someone actually began participating—followed by investigating their early activity. For example, someone who joined Twitter in 2006 and began using it actively saw the potential well before most—Tara Hunt understood the value of social currency before it became fashionable. Chris Brogan was blogging before he was Chris Brogan. The simple act of investigating the date of initial participation can help separate the true believers from the wagon jumpers. It's an exercise that often goes overlooked.

Quantity, Quality And Frequency Of Interactions
Nowadays, it seems that everyone is levering social technologies as a part of their business, but not everyone is using them the same way. If you are hiring someone for a social initiative and you need them to be comfortable actually interacting with in both public and private fashion, then you need to see proof of that. There are plenty of authors, consultants, etc. who use social technologies as new business vehicles, which can be very effective for them. But if your position requires more interaction and less push, there are a few things you can look for. Responses to blog comments could be one way (full disclosure, I would probably not be an amazing community manager). Activity on Facebook could be another. And there are a variety of tools that measure a full range of Twitter statistics including incoming to outgoing ratios, replies sent and replies received. Have a look at Twitter Friends for some basic charting and comparisons. Here's a sample based of my data: 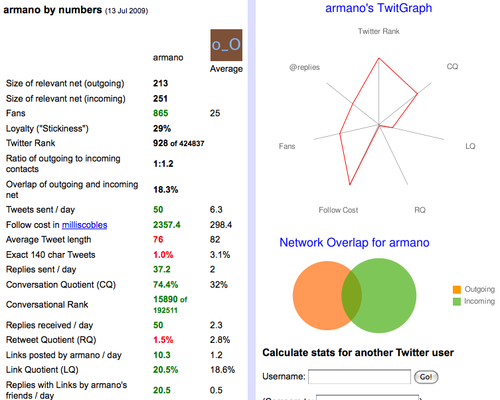 There are probably many other ways, I just wanted to capture a few to help get some folks thinking about this in different ways. Of course, the biggest challenge will probably be finding someone who will be a great cultural fit—this is usually the most critical and hardest to find for any organization. And of course none of these methods will tell you if your candidate is a good manager—defer to traditional tactics for that. But if you've found a few people who might fit your cultural/professional bill, and you are really serious about gauging their chops in the social space, it's worth going both broad and deep before pulling the trigger. And lastly, like anything else—never underestimate genuine word of mouth. If someone's really good at what they do, chances are you've already heard about them from someone you trust.