Yesterday I had the opportunity to share a few high level thoughts about the state of social business at the first ever Social Fresh conference held in Charlotte North Carolina. It's been several months since I've joined the Dachis Group and the majority of my time has been spent helping to build the business, and positioning while working on some limited engagements with clients and planting seeds for future relationships. If you've followed my work in the past—you'll find a few familiar thoughts here combined with new ones which we will continue to develop as we move forward.


As for the event itself, Social Fresh was a unique conference which attracted social business practitioners, educators as well as large organizations such as Wal Mart, Bank of America, Duke Energy, Ruby Tuesday and Lowe's to name a few. Sessions ranged from panels on Twitter featuring Kathleen Hessert (the woman who put @the_real_shaq on the map), to real world case studies from Jim Deitzel of Rubbermaid on how his company leverages social business techniques to create customer advocates. See video clips of both below:

There were many great presentations and case studies and I got to greet old and new friends such as Spike Jones, Gia Lyons and Olivier Blanchard to name a few. I was fortunate to have the opportunity to present the keynote in the afternoon. You can probably get the idea from the slideshow, but mainly what I had hoped to emphasize was that in order for social media to make the transformation to social business—change must happen deep within the organization and spill out into every way that the business operates—from how it interacts with business partners, deals will employees and allows it's customers to actively participate as part of the entire business ecosystem. Most of the presentation outlined some of the challenges we'll face but I also threw out some high level thoughts around potential organization model. 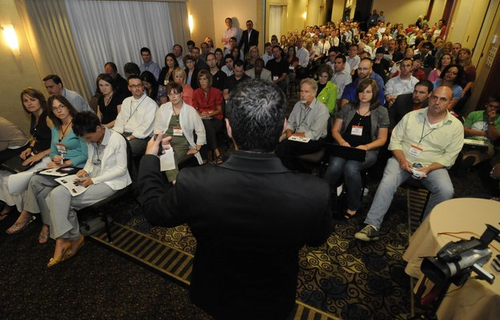 Me addressing the room at Social Fresh. Source: Charlotte Observer

Right now, a key theme is emerging for me through all of this and it's something I think all organizations will have to figure out.

A business that operates in a socially acceptable way (think open, collaborative, efficient, participatory) will have to transform it's internal and external business practices and orchestrate social initiatives across multiple business units, groups, brands and functions rather than establishing new departments which operate on their own. That is if the business is really serious about these things as opposed to being merely interested in tacking on a new way to market their products or services. These challenges we face are here now. I've had several conversations where people in the trenches are about to launch revised policies influenced by social media and others who are just getting educated. We're heading into an interesting phase of this industry—moving away from awkward puberty to something more mature. In order to do that, we'll need things like employee training, guidelines, rules of engagement etc. As Peter Kim notes, we'll have to scale—and as my friend Spike Jones says, we'll need a "movement". So get ready.