The Value of Visual Thinking

Originally posted on The Collaboratory.


I'm leaving for Las Vegas later this week to speak at Blogworld. I'm on a panel discussing the intersection of social media and brands, but what I'm really excited about is a presentation on Friday where I will discuss the value that visual thinking can bring to any organization. I have a passion for visual thinking. Being able to think visually, break down complex ideas and synthesize them into something meaningful is my forte. It's a skill that has landed me in the company of the smart and capable folks I currently work with. More importantly, I took whatever abilities I had and I gave them over to my ecosystem. In any social system, you always come to the table offering something of value rather than seeking it.

Educating
So what's the value of visual thinking for business? For starters it can help educate, especially if you are launching a new product, initiative or idea. Take for example our own vision for Social Business Design. When I first joined the team, Jeff immersed me in the company vision and I spent several weeks wrapping my head around the idea. During this process, I knew that we would need more than words to communicate such a big idea. One of the first things I did was to begin to visualize what critical elements looked like so that other people would have a "mark" they could file mentally and recall whenever they heard a word such as "hiveminded" or "metafilter." and the image with "yummy." Education is one value that visual thinking has. When I present our ideas on Social Business Design, I display screen shots of websites and social networks, and I watch the audience as they take notes. But when the visualizations of our 4 archetypes flash on the screen, the note taking usually stops and eyes fixate on the screen studying the image and the words. It's almost as if I can see their thought process in action. 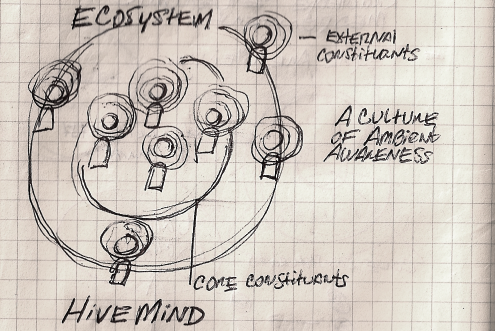 Communicating
It doesn't matter if we're talking about consumers or employees — attention is becoming scarce. If you want to communicate something, you need to capture attention and communicate your point quickly. It doesn't matter if it's email, Twitter, Facebook, Ebay, Youtube, phone calls, or spreadsheets. The average person is inundated by information and doesn't have the time or the focus to sit and watch a 20 minute video or read through your 50 page document filled with nothing but text. The value of effective visuals is to stop someone in their tracks, engage them, draw them in and inform them as they absorb what it is you are trying to communicate.

Training
In the design of business, visual thinking will be key in the design of new processes, systems, and structures. Expect to see the mapping of ecosystems, flows, org charts, social systems and data visualization. All of which can help people understand and get behind change. Visual language can also be an effective training tool as businesses retool and re-equip their employees to compete in blisteringly fast paced environments. Before employees actually perform new tasks, they will have to visualize themselves doing it. I'm a firm believer that visual currency will play a big role in the value exchange we see influencing the business world. But don't take my word for it, in the words of an ancient Chinese proverb: “Tell me and I'll forget; show me and I may remember; involve me and I'll understand.” Visual thinking equates to "show me", and that's the bridge between telling and understanding — that's the value it brings to any context.

We're not all visual thinkers (though we all have the potential). However we are all visual learners. Don't believe me? Simply pay a visit to any gradeschool and you'll see evidence of it everywhere. "A is for Apple," showing both the letter and a picture of an apple next to it. The cognitive recognition of the image often happens first. A child sees the object, thinks "yummy," learns the word, and when they do — they associate the word