We Are The Media. Do We Trust Media? 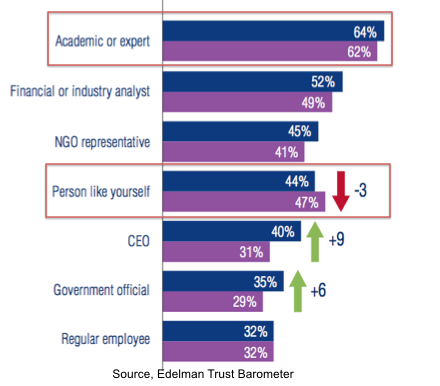 First, an informal disclaimer. While I work for the firm (Edelman) that conducted the 2010 Trust Barometer, the following opinions expressed are personal and I was not involved with the research or creation of the report. That said, I wanted to express a few non data based thoughts around the the specific finding that there is less trust in a "person like yourself".

Now, let's get into why this is worth discussing. Based on comments and conversation which I've seen in industry publications and elsewhere there seems to be a concern that this finding flies in the face of social conventional wisdom. Previous studies such as the one below conducted by Forrester tell us that we trust a friend or acquaintance who has used a product more than anyone else: 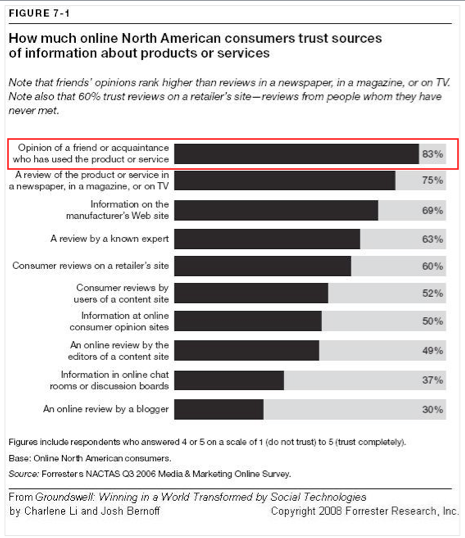 Below that is the review of a known expert which is less trusted. Note that these two charts are NOT apples to apples, (while the Forrester is more specific to consumers it does provide an interesting contrast). However, I have a few random but related thoughts that I'm going to put out there. If you want something more analytical you can find it elsewhere. Keep in mind that I approach things intuitively at times. 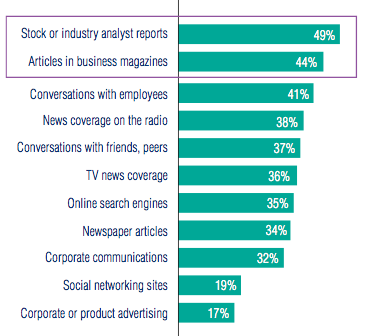 Everything Is Media. Do We Trust The Media?
At a recent client presentation, colleague Steve Rubel said something which I found to be very insightful. Essentially, we are all media. We act like the media, espousing opinions—reporting from the field (Iran etc.) and in turn media has begun to act like us (blogging, tweeting and becoming more opinionated vs. hard news oriented. The barometer had this to say about trust in the media:

"The only institution to lose trust around the globe is media. Over the last three years, trust in media has fallen from 48 to 45 percent among older informed publics. With the dispersion of traditional media’s authority and the rise of opinion journalism, trust in the institution as a whole has waned."

So with "peers" acting more like media and media acting more like peers, I'd put forth the observation that it's logical for people to take a step back and ask the question "who can I trust"? The blurring of lines here is likely causing some confusion. Also the speed at which media spreads. We've seen several examples of social media being "first on the scene" but also inaccurate. On the flipside as mainstream media becomes more opinionated, they may be perceived as less of an authority.  Some pretty interesting dynamics here—but I think it's fundamentally true that we are all media now. So who do you trust when trust in media has fallen?

Media Is Increasingly Paid
As the above chart also indicates, trust in corporate or product advertising is relatively low. Now, an inconvenient truth in world of social media is that many social initiatives are actually paid. And it's not only in cash (though increasingly it is) it's also in free products etc. A recent conversation with a peer in another firm was especially insightful as someone performing outreach to bloggers was telling me that the bloggers were making more than she did just by being full time bloggers. Is this social media? 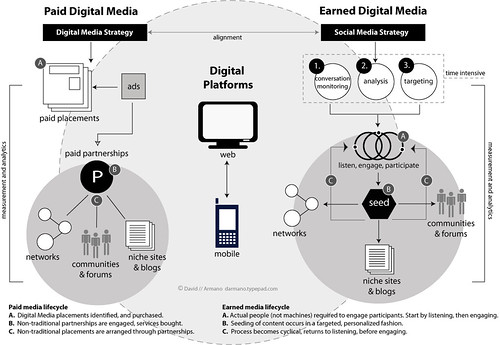 Well, it's leveraging social technologies, but I believe that it's closer to paid media side (see the above diagram) and in a fragile economy jaded yet intelligent consumers might just be coming around to this. Increasingly with new FTC ethics that force bloggers to be transparent about payment we are seeing the evidence of a paid system. Services such as IZEA are brazen about the fact that your platform in social media can and should be monetized. I say it's all fair game, but ask the following question:

Has the monetization of your blog etc. eroded trust with the people you serve? It's possible.

The Noise Is Deafening
Social media has given everyone a voice, and related to the points above the noise from advertisers, media and now our friends who act like media and use social platforms to advance their own agenda (if you use Facebook you know EXACTLY what I am talking about), it's conceivable that the average person is overwhelmed, possibly annoyed and frustrated at the bombardment they now receive from advertisers and friends alike. So where does one turn? The report suggests experts and academics and I see this as totally plausible. When there is so much noise, we seek a dense type of signal that is apart from the frey. It's quite possible that social media may be a victim of it's own success in this area. HOWEVER, it's worth noting that in the first graphic, "a person like yourself" still ranks high despite the dip in trust over the past year. It's possible that the amount of noise generated by peers in networks combined with some of these other factors may have caused the dip—though the movement is still very much in play.

Who Do We Consider Peers?
Lastly, and this is more of a question—who are our peers? Edelman colleague Christina Smedly said the following on Advertising Age:

"There are ... consumers who still only trust the people they see every day or their 120 friends on Facebook," Ms. Smedley said. "But there are those that trust all 380 of their friends on Facebook. And there's opportunity for brands with both groups. If marketers can find those action consumers, they can build campaigns that work through their parameters and get some very good results."

To my previous point about the amount of noise, I think there is a much validity to what Christina says here and I would add a further insight. Who are our friends that we have chosen not to hide in Facebook—who are the people whose phonecalls we take and whose e-mails we read right away? It's an important question. If there is a company that has totally nailed the algorithm in this, I'd invest in it because I think there is a future in understanding in depth how people separate signal from noise and who truly influences their behavior from consideration to point of action.

These are my personal thoughts. I hope you find them valuable and would like to hear yours.